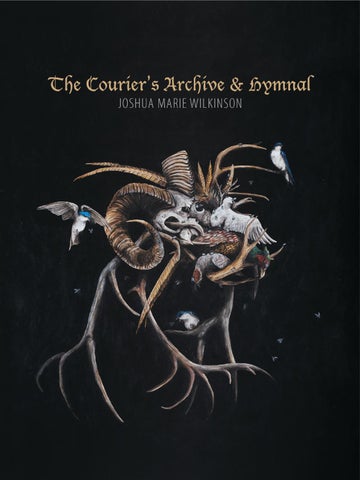 Acknowledgments I thank the editors of the journals in which excerpts of this work first appeared, in different forms: American Letters &amp; Commentary; Eleven Eleven; Lana Turner: A Journal of Poetry and Opinion; Mid-American Review; New Delta Review; Poor Claudia; and Verse. An excerpt of “The Dogs” was published as part of the Poem-A-Day series by the Academy of American Poets, and the first paragraph of “Day for Night for Night” was printed as a broadside for the So-and-So Reading Series in Raleigh, North Carolina. “In the Trade of Alive Letters Mis-sent” was published as a chapbook by Brave Men Press (Northampton, 2011), an excerpt of which was also printed as a broadside by New Michigan Press to commemorate a reading at the Poetry Center in Tucson, Arizona. A warm thank you to all the editors and printers, especially Shane Smith, Ander Monson, E.B. Goodale, &amp; Brian Foley. And to my friends &amp; family: Solan Jensen, David Rubin, Aurelie Sheehan, Jane Miller, Alison Hawthorne Deming, NEG, Smithy, Brandon Shimoda, Dot Devota, ZBS, Baby Snakes, Peter Streckfus, Kate &amp; Brent, FS&amp;G, &amp; Chris Cokinos. Jason, John, Kris, and Zuzu: thank you, Sidebrow. Italicized lines on pages 5 &amp; 7 are from Bashō’s The Narrow Road to the Deep North and Other Travel Sketches (tr. Nobuyuki Yuasa), on which this book is based. The italicized sentence on page 27 is from Samuel Beckett’s Molloy. The Courier’s Archive &amp; Hymnal is Book 3 of the No Volta pentalogy.

In the Trade of Alive Letters Mis-sent 19

They were offered the choice between becoming kings or the couriers of kings. The way children would, they all wanted to be couriers. â&amp;#x20AC;&amp;#x201D; Franz Kafka (tr. Clement Greenberg)

Dragging a long hull — &amp; following the debased coinage of ancients — I blocked through the consumptive river, looking into a wood grown huge without kings or their servants, cutting doors from oaks. Night stalled wet with gulls against mission islands. A corduroy song I could holler into the ghost maze. Commands of a body to falter. A long, weird sleep under dripping boughs, my breath a gold cloud puffed into rabbits. &amp; from my dream, the token used for a bathtub stopper. Fog lolling at a bend where the ravine shunts to weed. River’s edge a brain of mica, claimed for ice melt. It sucked off my boot, &amp; I tossed the other into a hollow.

Bird-raked wind, laudanum in my tea, &amp; my mouth cut by a scrappy branch. Loops of rain trafficking in the sooty tent of deciduous half-ceiling. A seeming doorway through ivy hung like netting &amp; nests. I follow your dents out of here. With a polaroid of Matta-Clark’s hand-drawn labyrinth taped to my satchel. How did the song stake out a clearing? What icy star kept you to yourself ? The rider phantom’s beside me now, listening with an accordion’s wheeze for breath. Night carpets over.

A scene before my eyes: lake mist over three girls triangulating a tarp to wrap their mother, dead. Steel trap of the lake topped with snow &amp; waves wound to hooks by stagnated wind. A blast furnace gathers wraiths to statue up. False horizon of bony light where the moon stutters a beam onto our bridge. Fields rippled with lime, a crow drops onto a tractor seat for seed. Four thousand entries toward heaven papered over the clapboard walls of the diaristâ&amp;#x20AC;&amp;#x2122;s pond shed. &amp; a stalkerish moon into a clearing spelled which travelersâ&amp;#x20AC;&amp;#x2122; shadows were still here.

I met Samuel Beckett &amp; held a cap heâ&amp;#x20AC;&amp;#x2122;d taken from the head of one of his actors to shoo mice into the theater alley while he tied his sneaker &amp; repeated my full name finding a sort of song in it. I put this into my voice recorder. Minus is the one I gave it to. You may find him in a studio apartment in one of the western cities. Doing certain tasks with voices, he threads American grids with their muttering in his skeleton. Dark archive, what is your name for no becoming, stammering through wind? (Clean your arms up with a rag &amp; slow the way down to flies.) Your man gets his dogs together on the nettlepath, where each stranger shows his face in bordering light.

Tonight just opened its door. Your stranger steps in with a head of worries: saying, I have no feeling in my hands, my face. The last brother, the moonâ&amp;#x20AC;&amp;#x2122;s ditch. We sketched the map out together with red tea. I held my hand open for him to practice the lines on. Sorry I know you less than the ice does. Mr. Matta-Clark, dawn sniffs through an oval, mooring the joists. Which are the tools for chronicling what you sawed through? Drywall in an elbow crease, scraped free with sink water. A hole smeared into the boathouse floor. I startle the gull-laden ocean into beams.

Your brother stood into the window, river below like animals waiting. Bored gleaming spits through a net you turned the boathouse into. A short grin in your work saw awake. Toting your cameras down to the work of dust underground. The train conductor stutters at a silvery flask, &amp; night unloads its poisonous spores. I touched the door’s window with my glove off. Pigeons in the spikes anyhow. A woman reading “Passers-by” with an eye shut, her wrist marked blue. Snow comes early for the city streets, &amp; the trees yield to what signals? Incorporation is no enemy we fold our hands around as though it were a cat’s head. A bog’s our northerly quorum.

Fire sleeves, summer graves, &amp; the dead woman points the way. Then roof hens flap under a halfmoon. Golden deerhounds stand sentry. Cobble rows, skeletal slavering. Trappers mend the damaged traps. Ink about the throat of the sleepwalker lured to hovering lamp moths. Your fox asked again for the road-weary ones to collect in the sewergrate shadows at a bit of lightning. To strike set in a cache of stage directions penciled onto the curtain tags. A bit of stubbleâ&amp;#x20AC;&amp;#x2122;s on the paw where fur was caught, but your bones are alright, fox.