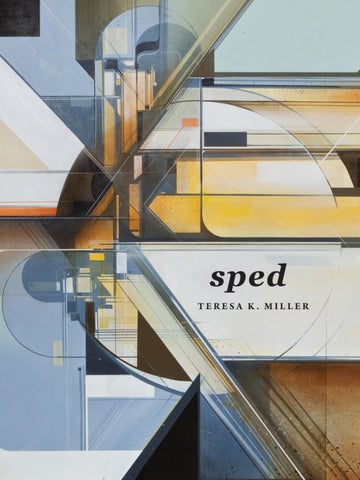 Acknowledgmen ts Many thanks to the editors of the journals in which excerpts from sped first appeared or were reprinted: Coconut, Diagram, slouch, E*ratio, Moria, Kadar Koli, and Cricket Online Review. Tarpaulin Sky Press first published â&amp;#x20AC;&amp;#x153;Forever No Loâ&amp;#x20AC;? as a chapbook in November 2008.

I had to turn away from Jesus/ a pouring forth captured in wood/ carved blood spilling from every rib, every limb// On CNN World Edition the school children of Darfur hold up fingers representing the number of relatives killed/ two, three, five, six/ mother, two sisters/ mother and brother/ father// N達o quero nada, obrigada// Armfuls of abalone bracelets and small giraffes shaped by pocket knives/ Italiana? Alem達? Portuguesa? Americana?/ The merchant smiles/ bows and says Presents from Africa//

A senhora fale inglĂŞs? Sabe onde fica o Bosch?// In a rare traveling exhibit/ the Polish allow him to hang on a wall in Iberia/ two floors below the freestanding triptych screen/ color on one side, black and white on the other/ mental file next to the two-inchsquare monochrome from World History// Meg Hamill wrote about a one like every other one, every dead one, and outside was the hummingbird tree/ a whole tree chittering with hummingbirds on the oval// He is gray/ the blood worn but nauseating//

The children hold up their fingers and make lists:/ mother and father/ three sisters/ father// A luxury to see the religion as morbid, obsessed with dying/ Mary Jane says people must identify with the suffering// Imagine losing the cat second only to losing my father, much easier would be losing my partner// The train left Macondo filled with bodies from the marketplace/ the train that brought the gringos and their scales to weigh bananas// The thorns dig into his grained face// Pai//

I have no fistula, not thinning hair, no pulmonary scar tissue from chemotherapy// The woman on the linha azul taps her white cane against the floor, the legs of standing passengers/ wails something blending together// Escreva?// She writes imagined death notices, all those birds outside/ and donâ&amp;#x20AC;&amp;#x2122;t you see that the things we named paved the road to forever no more/ as much as the thorned evenings smoldering on the couch?/ The overnaming to thicken a veneer too much for the points to punch through//

NĂŁo ĂŠ nada// Dear X, I might be in love with you/ no matter the extra ten years trailing behind/ your first kiss before I had the chance to emerge from the spinal/ wide eyed/ and grab my fatherâ&amp;#x20AC;&amp;#x2122;s beard// Every hand in the classroom raised, and I hold one finger to the television// Iraq Body Count to differentiate the victims from one and one/ from third deadliest month in war// Her cane clicks against the standing pole/ one eye a red gouge, one never emerged/ one eyelash stuck to smooth skin stretched over a sphere/ no opening//

In crime/ in encouraging the worst in each/ in the summer heat along the worldâ&amp;#x20AC;&amp;#x2122;s largest ocean or on the largest freshwater dunes// I said Where is your purse, she said Right here, I said Where is your purse, she said It was right here// mala sem alĂ§a/ We are not in Brazil, thank you// Imagine what your penis looks like, what your beer gut looks like under your too small T-shirt// Dear X, I think I am in love// Not a tumor larger than my back, no tapeworms, not an eye without access to the light//

He brings couverts/ a spiral of shrimp heads/ green and black olives/ pão e queijo// Madam, would you believe me if I told you they were professionals?/ But she said Where is your purse, and I said Right here// Não quero nada, obrigada/ Tem o café americano?// At the dinner table he dissected the banana, examined it under a magnifying glass, weighed it/ Prelude to the massacre, to the years of rain/ blame the train that brought the gringos// How do you expect to sell anything when não fale inglês?//