None of This Is Real 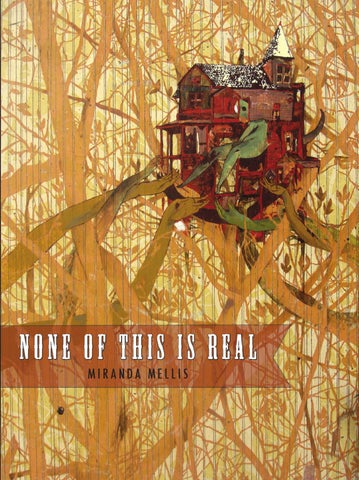 a destination; she was only part of the scenery. She had no address, and she produced nothing,

It seemed the world had not decided she was

so the world had no use for her. She was of no use to the world but she found the world very useful indeed. Without the world, she thought, what would I have to look at?

none of this is real MIRANDA MELLIS

Sidebrow is a member of the Intersection Incubator, a program of Intersection for the Arts (www.theintersection.org) providing fiscal sponsorship, networking, and consulting for artists. Contributions to Sidebrow are tax-deductible to the extent allowed by law.

None of This Is Real Miranda Mellis

Here is what happened. I became ill suddenly. I tried to act normally, taking walks with friends, eating chocolates, giving advice. But then it would rise up in me. My face moving involuntarily, twitching, leering, telling a story over which I had no control. The illness subsided if I was by myself or only incidentally with strangers (on the bus, in line at the café, passing in the hallways of houses or buildings). But if there was a deeper acquaintance, some superstructure of expectation to companionship, a closeness or depth of feeling or sincerity required, the attack was triggered. The walks, the talks, the chocolates, the advice giving — it seemed they would destroy me. We would walk right to the edge of high cliffs, a small crowd marveling at the vista. Beautiful? Opaque. Trying to find meaning in the view, my face would start its antic, sneering rebellions. I couldn’t enjoy the view with the others. My body was rejecting meaning, or so it seemed. At the very least, I had learned to refrain from complaining, or even speech. In not speaking I became a plateau. My cheerful companions tried to keep things light, understandably un­ nerved by my facial aggressions. Truly, a person may become an abyss: I felt it happening to me. My visage became a kaleidoscopic mask; people weren’t sure who they were looking at. I could not translate. I felt non­existence encroaching. Occasionally some little thing would bring

none of this is real

The first night on a visit to see his mother, O hardly slept on an emaciated mattress in the trough of an old sofa bed. He had dreamt of a vast con­ struction site made of thin, gray plastic rods that, like the intersecting leaves of the horsetail plant, were easily adjoined or separated. The site was porous, open to the elements. Here and there people “worked,” which consisted of sticking the rods together and then pulling them apart. An angry foreman told O in despair that he was the only one who knew the truth: the whole work site was a façade. His job was to hide the truth from the workers, forever. O remarked to the foreman that the workers might notice for themselves, as pulling the rods apart and then sticking them back together was self-evidently meaningless. The foreman shook his head. You don’t understand, he said; they wouldn’t know unless I told them and I’m hired not to. Is your work pointless too then? O asked. No, said the foreman; I keep everything going. What would happen if you told them? O asked. I would lose my job, the foreman replied sadly, turning away. In the morning O’s mother Sonia had come upon him standing in a curious way with his head turned all the way to the left and tilted slightly forward. O had always been a quiet person, which his mother appreciated, but this visit he seemed to talk less than ever. What Sonia had once found a comforting quietude in her son now registered as a nameless despair. She hadn’t seen him in a year, and now this, an unexpected visit that found him drooping by the foldout.

the coffee jockey Dear incomprehension, it’s thanks to you I’ll be myself, in the end. — Samuel Beckett, The Unnamable

The coffee jockey bent over to get some lids and her back went out. She couldn’t move, nor could she speak. People in line just waited and sighed and looked at their watches. The radio played a song by Van Halen. The coffee jockey was bent in half. She could see the rubber mat on the floor, and the shelf where the packets of sugar and extra lids were kept. She could hear Van Halen and she looked at the rubber mat, which she would put outside when she mopped at the end of the day, and she stared at the big holes in the rubber mat and heard the song say, “My love is rotten to the core,” and it was like she was being killed. She couldn’t stand, nor could she speak. The phone rang and she couldn’t answer it. She just hung there, bent in half, staring at the rubber mat and smoking a cigarette. The woman at the head of the line looked down at the coffee jockey bent in half on the other side of the counter and wondered how long it would take to get her espresso. The people in line were angry about the line and waited impatiently but with a look of patience because of what others might think. They were angry because the coffee jockey made herself a cup of coffee for every single one she made for everyone else and now, bent in half, she had ceased making espressos altogether. One man in line sighed loudly. He crossed his arms and shook his head because time was taken up standing in line. During these interludes he felt his time being wasted. He did not know what to make of this loss, only to lament it.

The movie theater smelled of cigarettes and rain. The rows of seats creaked. The older sister could see that the tall white man on the movie screen was dangerously crazy. She felt sad for him. His flat, wide-brimmed hat was familiar. Who wore hats like that? Oh yeah, the Quaker oatmeal man. The man in the Quaker hat resided where creepy men are found, in bushes by the sides of highways. He was in a terrible mess. Because of his religion. But what is wise blood? This their mother had not explained to them when she took them to the triple feature, just to get out of the house today; she said, “It’s only a dollar at the Strand.” But the older sister knew that they weren’t there to get out of the house, they were there to get away from her mother’s boyfriend. During the movies, her mother kept getting up and going to the lobby. Usually she was rapt at the movies, shushing her daughters. But this time she was distracted. Every time that her mother came back and sat down next to her the older girl looked at her but she wouldn’t look back. “Who were you talking to?” the older girl whispered. “Your uncle,” she said. “Why?” Her mother didn’t answer. The older girl knew that her uncle had lent her mother money. A few minutes later her mother left again. When the man in the Quaker oatmeal hat poked his own eyes out, the younger one cried and hid in the older girl’s lap. He had realized something about life, the older girl thought, something that she knew as well: you had

transformer The object of fear is a future set in the past. â&amp;#x20AC;&amp;#x201D; Adam Phillips, Terrors and Experts

In the old world, a woman asked her daughter to set fire to the woods with her mind. The daughter tried, hoping to please, as all young do. She looked at the forest behind their house and told it to burn. But the forest remained as it was. “Try again,” her mother commanded. “Send yourself into the wood and rub against it with the flint of your life; use that spark.” She snapped her fingers and said, “It should catch, just like that.” The daughter, obedient, tried again. She closed her eyes and saw herself floating erratically towards the woods. Coming to a broken branch, she rubbed. Nothing happened. She saw the forest floor spread out below her, an alphabet she had only just begun to learn. Her mother looked intently into the trees, scanning for flames. She knew her authority was not in question. Nor did her daughter lack heart. The girl lit upon a small dry twig in her mind’s eye and tried to catch it on fire, though she had no real interest in that action, no desire to perform it, the way a dog has no real interest in trying to eat with a fork, except maybe as a joke. What’s more, she could tell, though her mother had yet to realize it, that she was not equipped with that sort of flint. But she tried. And again, she failed. The mother turned to see her daughter lost in reverie, eyes closed, hands clasped in front of her, her body rising up on her toes, falling back on her heels, a warm, pleasurable pressure in the center of her feet, between her ribs, in her throat. When the girl opened her eyes, she was alone. She walked to the forest. She noticed a woman in the brush foraging. She also saw a worm moving through the undergrowth. She watched its antenna-

None of This Is Real