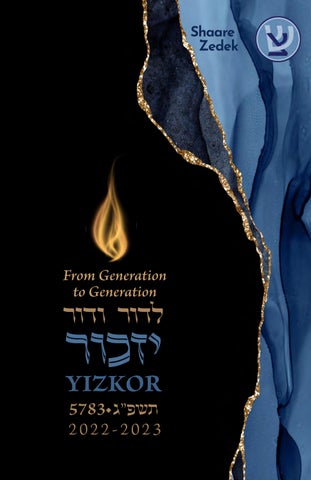 Members who were lost to us in the past year

May their souls be bound up in the bonds of eternal life.

God of mercy, in whose hands are the souls of the living and the dead. We consecrate this hour to the memory of our dear ones who have been called by You to their heavenly and eternal reward. Pained by our loss, children recall beloved parents who have been removed from the scene of their earthly existence. Husbands and wives recall the bonds of love and affection that united them in life and that now unite their souls. Fathers and mothers recall precious children who, like tender flowers, were plucked ere they came to full bloom. This very hour, dedicated to the memory of our loved ones, is at once a tribute to them, and a glorification of You. Tribute to them it is, because we now declare that their memory is not dimmed by the years, and that the passing of time enshrines it all the deeper in our hearts. Glorification of You it is, because we here affirm that life does not end with the grave, and that dust is not the ultimate destiny of those who are made in Thine image.

The Blessings We Seek

Source of blessing, our Guardian and Hope, Bless, we pray, all who are dear to us. Watch over them with Your protecting love. Bless the people of this congregation. Grant them health of body and serenity of spirit. Guide them on the path of Torah and good deeds. Bless our country, our leaders, and our fellow citizens. Keep us faithful to our heritage of freedom and justice. Help us to banish all suffering and strife. Bless our brothers and sisters in the Land of Israel. Prosper the work of their hands and minds. Strengthen them. and grant them peace. Bless our fellow Jews, wherever they may dwell. Comfort those who are in distress. Deliver them speedily from darkness to light. Bless all Your children, in every land and community. Unite them in understanding and mutual helpfulness. Hasten the day when all can rejoice in a world of peace.

Adonai, what are human beings that You take account of them, mortals that You care for them? Humans are as a breath, their days like a passing shadow. In the morning they flourish anew, in the evening they shrivel and die. Teach us to count each day, that we may acquire a heart of wisdom. God is always before me, at my right hand, lest I fall. Therefore, I am glad, made happy, though I know that my flesh will lie in the ground forever. In this solemn hour consecrated to our beloved dead, we ponder over the flight of time, the frailty and uncertainty of human life. We ask ourselves: What are we? What is our life? To what purpose our wisdom and knowledge? Wherein is our strength, our power, our fame? Alas, man seems born to trouble, and his years are few and full of travail. But our great teachers have taught us to penetrate beneath appearances and see the higher worth, the deeper meaning, and the abiding glory of human life.

I have set the Lord before me always, God is at my right hand; I shall not fail. Therefore, my heart rejoices, my whole being exults, And my body rests secure

We Recall Eternal God, we have come to sanctify our fleeting lives by linking them with Yours, Life of all Ages. In You, generations past, present, and future are united in one bond of life. At this sacred hour, we are aware of those souls through whom we have come to know of Your grace and love. All the wisdom, beauty, and affection that have enriched our lives are the garnered fruits of our communion with others. Many of those to whom we owe so much are alive with us today; and we pray that we may be able to reward their goodness and their devotion to us by acts of love and loyalty. But others have passed forever from our midst, leaving us a heritage of tender memories which now fill our minds. Some of us recall today beloved parents who watched over us, nursed us, guided us, and sacrificed for us. Some of us lovingly call to mind a wife or a husband with whom we were truly united - in our hopes and our pains, in our failures and our achievements, in our joys and our sorrows. Some of us remember brothers and sisters, who grew up together with us, sharing in the play of childhood, in the youthful adventure of discovering life&#39;s possibilities, bound to us by a heritage of family tradition and by years of comradeship and love.

Some of us call to mind children, entrusted to our care all too briefly, taken from us before they reached the years of maturity and fulfillment, to whom we gave our loving care and from whom we received a trust which enriched our lives. All of us recall beloved relatives and friends whose affection and devotion enhanced our lives, and whose visible presence will never return to cheer, encourage, or support us.

Memorial prayer for a father

May God remember the soul of my father (insert name) who has gone to his eternal home. In loving testimony to his life, I pledge tz’dakah to help perpetuate ideals important to him. Through such deeds, and through prayer and remembrance, may his soul be bound up in the bond of life. May I prove myself worthy of the many gifts with which he blessed me. May these moments of meditation strengthen the ties that link me to his memory. May he rest in peace forever in God’s presence. Amen.

Memorial prayer for a mother

Memorial prayer for a male relative or friend:

May God remember the soul of my relative/friend (insert name) who has [have] gone to her [their] eternal home. In loving testimony to her life [their lives], I pledge tz’dakah to help perpetuate ideals important to her [them]. Through such deeds, and through prayer and remembrance, may her [their] soul[s] be bound up in the bond of life. May I prove myself worthy of the many gifts with which she [they] blessed me. May these moments of meditation strengthen the ties that link me to her [their] memory. May she [they] rest in peace forever in God’s presence. Amen

For our Communal Shaare Zedek Family

We Remember The Holocaust

In memory of the 6,000,000 who perished We recall with bitter grief the catastrophe which overwhelmed our people in Europe, adding an unprecedented chapter to our history of suffering. We mourn for six million of our people, brutally destroyed by “civilized men” behaving like savages. The cruelties of Pharoah, Haman, Nebuchadnezar, and Titus cannot be compared with the diabolical schemes of the modern tyrants in their design to exterminate an entire people The blood of the innocent who perished in the gas chambers of Auschwitz, Bergen-Belsen, Buchenwald, Dachau, Treblinka and Theresienstadt, cries out to God and man. We will never forget the burning of synagogues and houses of study, the destruction of holy books and scrolls of Torah, the sadistic torment and murder of scholars, sages, and teachers. They tortured the flesh of our brothers and sisters; but they could not crush their spirit, their faith, their love. We recall our brothers and sisters in the Warsaw Ghetto, Jews who valiantly defied the monstrous adversaries. And we recall the heroism of those who, in the face of unprecedented and overwhelming force, maintained Jewish culture and asserted Jewish values in the very midst of enslavement and destruction. Let us pray: O Lord, remember Your martyred children. Remember all who have given their lives for the sanctification of Your name.

Memorial Prayer for those slaughtered in the sanctification of God’s name, and in battle

God, full of mercy, who dwells in the lofty heights, provide eternal peace and rest upon the sheltering wings of your Divine Presence, unto the souls of our six million brothers and sisters, men, women, and children, victims of the Holocaust, who were mercilessly slaughtered, burnt and exterminated for the Sanctification of Your Name, by the German Nazi assassins and their helpers. And unto the souls of the gallant men and women of our Armed Forces who gave their lives for Crown and Country. Therefore, Master of Mercy, we pray you will protect them forever, from the shelter of your holy wings, tying their souls with the rope of life eternity. The Garden of Eden shall be their resting place, and they shall rest peacefully and let us say: Amen

d Psalm 23 A song of David. The Lord is my shepherd; I shall not want. He causes me to lie down in green pastures; He leads me beside still waters. He restores my soul; He leads me in paths of righteousness for His name&#39;s sake. Even as I walk in the valley of the shadow of death, I will fear no evil for You are with me; Your rod and Your staff, they comfort me. You set a table before me in the presence of my adversaries; You have anointed my head with oil; my cup overflows. Surely goodness and mercy shall follow me all the days of my life, and I will dwell in the house of the Lord forever.

May their memory be for a blessing

Carrying on their legacy PRESIDENTS

E IN MEMORY OF Denise Miller

Linny Blauer IN MEMORY OF

Norman Bubis IN MEMORY OF

Elizabeth (Beth) Goodman George and Gertie Goodman IN MEMORY OF

Rona Shefler Heft IN MEMORY OF

Doreen Levine IN MEMORY OF

Rita Shapiro IN MEMORY OF

Dr. Michael Wasser IN MEMORY OF

d or Those We Remember with Love:

We are proud to continue in the tradition of our fathers, serving our community with dignity and respect. Thank you for your ongoing trust and support. Brandee and Earl Laurence and Daniel 5635 Ferrier (corner Devonshire)