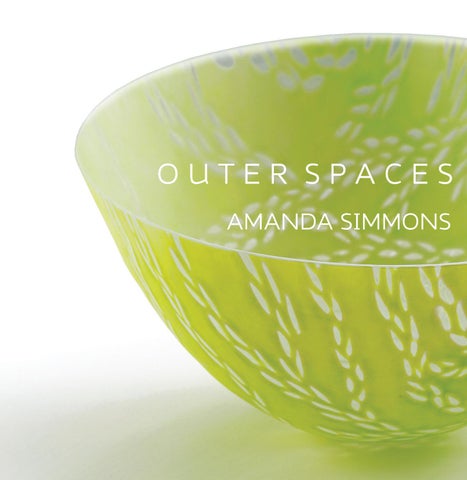 The Scottish Gallery is delighted to present Amanda Simmonsâ&#x20AC;&#x2122;s first solo exhibition. Outer Spaces is the culmination of a two-week residency at Lyth Arts Centre in Caithness and the continuing research of the Flow Country and its massive capacity to store carbon in the many layers of peat. Working from watercolour prints inspired by the patterns and colours of the land and sky, Amanda has made some of her largest gravity formed glassworks to date for this exhibition. Originally trained in Biomedical Sciences (Pharmacology) and Clinical Sciences, Amanda became interested in glass in 2002 after a stained glass course with Ray Bradley and then pursued a postgraduate in Glass and Architecture from Central St Martins College of Art and Design, London, in 2004. Amanda currently works from her studio in Dumfries and Galloway.

Amanda in her Dumfries & Galloway studio, 2016

OUTER SPACES ‘We all have our favourite outside escapes, by the sea, up a mountain; mine are the wide open lands of The Flow Country. I’m also lucky to live in a very rural part of Dumfries & Galloway near the Galloway hills and my favourite parts of this land are the large open, mostly boggy type spaces which we are surrounded by. I have made work that investigates peat formation, the many layers of bog moss Sphagnum and other bog species create the thick Catotelm bottom layer that can be many metres deep, built up over many years. This layer stores the carbon; it is thought that the Flow Country carbon store is greater than all the forests and trees in the UK put together. The top living layer, Acrotelm, can be up to 40cm deep. Moss is constructed with a single layer of cells that have a large water holding capacity and a slow rate of decay. The main fascination I have with peat is its ‘natural museum’ properties that can preserve whole items for centuries in its many layers and how precious it is in terms of controlling climate change. Preciousness and fragility are continuing themes in my work and help form the very nature of my glass pieces. I make them as lightweight and as thin as possible whilst ensuring a strong finished piece. My Skyform works capture the huge, continually changing sky scapes of these open spaces, whilst thinking of the many birds in these rural areas, hence the ‘egg’ forms of the skyscapes.’ Amanda Simmons, 2017

â&#x20AC;&#x2DC;The North Lands series comes from the colours and patterns found across Caithness in the stones and on the many beaches. The lichen varieties that can be found on the dykes and abandoned croft houses have an amazing range of colours from pale yellow, powdery greens and bright oranges. Their patterns of growth are echoed in the seaweed strands; these designs can be seen as hidden outlines within some of my pieces that only show in certain lightsâ&#x20AC;&#x2122;. Amanda Simmons, 2017

‘My design process includes photography from the field and research of colour and pattern through printmaking. I find Japanese Woodblock Watercolour printing easy to translate into the layering and mark making I use in my glass work. I work on a clear, thin piece of sheet glass, sifting on layers of glass powders in varying contrasting colours and make marks directly into the raw, unfired glass. Once fired, I will flip the glass over and work on the second side as the final object will be 3D and so both sides of the glass will be seen. Once I am happy with this ‘blank’, which may take a few more firings, I will then ‘slump’ the vessel form through a hand cut aperture. Using the physics of mass, heat, time and gravity, the glass becomes pliant and will free form a deep vessel form. I finish my pieces using many cold working processes to shape and mark the glass including sandblasting, hand lapping, diamond point and wheel engraving.’ Amanda Simmons, 2017

Lyth Arts Centre Residency “Why should anyone bother to be interested in peat bogs and mires in general? They are not places where people have ever been notably comfortable. Indeed, in various ways our civilisation finds them very alien indeed. They are remarkably inaccessible, sometimes difficult to traverse on foot and always presenting obstacles to wheeled vehicles. They used to have a reputation for harbouring disease, and certainly the fen-men of former centuries were far from healthy.” Dr Hugh A.P Ingram, University of Dundee Conserving Peatlands CAB International 1997 ‘Why indeed? The Flow Country covering Caithness and Sutherland is thought to be the largest area of blanket bog in the world, and is as far away from where I grew up in Kent as it could be, without leaving the mainland, but it is a place in the world I feel very connected to. Since my first trip in 2008 to attend a Masterclass at North Lands Creative Glass I’ve returned to this area one or twice a year, enticed by the huge land and sea scapes enhanced by the northerly light. It is a region that is polar opposite, in terms of compass and landscape, to where I now live in rural Dumfries and Galloway. I love these contrasts. In 2015 I was invited on a residency at Lyth Arts Centre in Caithness by residency officer Karlyn Sutherland and owner William Wilson. It was a pilot project investigating artists working with the Environmental Research Institute based at Thurso. It was here I got to delve deeper into The Flow Country and learn about the impact of renewable energy on local Scottish wildlife especially the sea bird population. The residency also gave me time on my own work. Having time to think without distraction or deadline is very precious. I caught up on research, reading and planning a bigger body of work that has come very slowly together. I was able to spend time with research scientists based at the Environmental Institute. My first visit was with Liz Masden, Research Fellow at the Institute. We chatted about her line of research in sea birds and renewable energy sources and about the very data heavy work of 'modelling'. This involves taking collected data and creating a program that enables the viewer to predict behaviour and a tool to be able to change parameters such as collision occurrences, prey (food), nesting and flight paths. Four large sea bed turbines are going into the Pentland Firth around Stroma (the first in the country so far) and this type of program is instrumental in the design of these machines to help cause the least disturbance to the sea birds in the area.

The species most vulnerable in Scottish waters are the Common/Black Guillemot, Razorbill, European Shag, Great Cormorant and Atlantic Puffin. Scotland has approximately 5 million sea birds and has many inland and offshore turbine developments. Protected habitats exist on land but there are no areas at sea and the numbers of sea birds are declining fast due to shortages of food, habitat problems and climate change (increased storms). One of the negatives of banning the practice of discarding catches when over limits was the available food for sea birds, already in competition with commercial fishing. Liz has published many papers alongside other scientists concerning specific species of sea birds and their behaviour and the assessment of tidal stream turbines and wave energy devices. An early start at Thurso meeting Rebecca Mckenzie, a field technician based at ERI. We started with a quick tour of the lab facilities with lots of technical information about the sampling we would do at the Flow Country's RSPB Forsinard Reserve and the equipment that the samples would be measured in. It's a long trip out to the site and we hitched a ride with another ERI PhD researcher and visiting intern. Lovely to be driven so I could follow the landscape. It was a good dry and low wind type of day and a short hike to our first site at the natural pools. There is much research and re-instigating of the peat land happening currently across the RSPB Forsinard site. The samples we took from the natural pools are compared with manmade pools, investigating whether they work in the same way. Rebecca took the more complicated samples and I spent the time emptying drainage tubes and documenting how much is collected (severe syringe thumb by the end of the day). The land is beautiful, bleak and peaceful apart from a few low flying jets, at the time of the residency in early November there was not much bird action but the area supports many bird species at the most southerly point in their habitat such as the red-throated diver, black-throated diver, golden plover, greenshank, golden eagle, merlin and shorteared owl. A long and tiring day but a wonderful experience, a brief insight into the life of a research scientist.â&#x20AC;&#x2122; Amanda Simmons, 2017

Amanda Simmons received open project funding from Creative Scotland to create larger scale works. The grant enabled her to buy a larger size flatbed diamond grinder and provided her with time in the studio to create a large body of work for her first solo exhition; Outer Spaces at The Scottish Gallery.

Published by The Scottish Gallery to coincide with the exhibition: AMANDA SIMMONS OUTER SPACES 5 - 29 JULY 2017 All rights reserved. No part of this catalogue may be reproduced in any form by print, photocopy or by any other means, without the permission of the copyright holders and of the publishers.