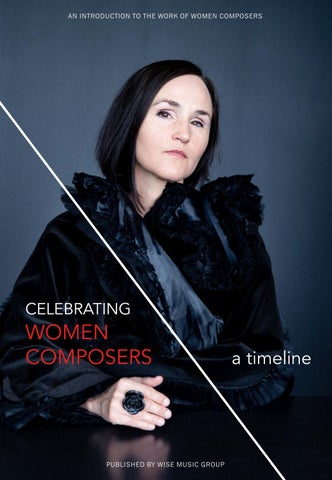 AN INTRODUCTION TO THE WORK OF WOMEN COMPOSERS

Wise Music Group has long celebrated diversity in its classical catalogues. The call for fairer representation of women composers in the programming of festivals and orchestral seasons has never been stronger. As a result we are regularly asked for information about the repertoire written by women composers whose music we represent. This booklet is laid out by composer in chronological order and emphasises the rich history and output of their orchestral music in particular. We have included brief introductions to each composer, repertoire listings and links to explore the music further online. This new 2020 edition includes such leading Russian names as Sofia Gubaidulina, Galina Ustvolskaya and Elena Firsova, represented in America and Canada through G Schirmer, as well as new signings and a selection of updated works. There are of course many others too, such as Ethel Smyth, Elisabeth Lutyens and, indeed, Oscar-winning composer Hildur Guðnadóttir (whose work we will be further celebrating in the coming months) who also represent the diversity of our catalogue and are all equally worthy of discovery. Visit wisemusicclassical.com for more details or contact your local Wise Music Group office or representative for further information about any of the composers or repertoire featured in this booklet. Yours sincerely,

In 1933, Florence Price became the first African-American woman to have her work performed by a major American orchestra, when the Chicago Symphony Orchestra gave the world premiere of her Symphony No 1 in E Minor. Priceâ&#x20AC;&#x2122;s revelatory interpolation of different African-American music styles into classical compositions will delight and empower audiences and creators for generations to come. Key Works Symphony No 1 in E minor (1932) 40 mins 2+2pic.2.2.2/4231/timp.perc/str Piano Concerto in One Movement (1934) 18 mins piano; 1121/2220/timp.2perc/str Colonial Dance (tbc) 6 mins 2+pic.2.2.2/4231/timp.2perc/str

A distinguished composer, writer and teacher, LeFanuâ&#x20AC;&#x2122;s music eschews the harshest elements of modernist aesthetics revealing plenty of heart amidst the angular surface.

Saariaho’s music follows in the French spectralist tradition and is continually 'varied and wondrously strange’. Her ‘pieces unfold with minute and seemingly constant shifts of subtle sounds and colourings… quivering sonorities and spin off, sometimes disappearing into an ether’ (The New York Times). She was the first female composer to be programmed at the Metropolitan Opera in over one hundred years, after Ethel Smyth.

Master of the Queen’s Music, Judith Weir has a gift for storytelling, both in her works for the stage and in her orchestral scores. Drawing on folk tales and traditions from the British Isles, Europe and further afield, she combines drama and lyricism with a taste for the unexpected. Key Works Piano Concerto (1997) 15 mins piano; string orchestra woman.life.song (2000) 45 mins soprano; 3(afl,pic)03(bcl)0/3perc/hp.pf/gtr/str(20221) The Welcome Arrival of Rain (2001) 16 mins 3(pic).2+ca.3.3/4400/timp.3perc/hp/str

Maja S K Ratkje has been honing her singular, interconnected performing and composing styles for more than twenty years. This process has placed her at the forefront of the musical avant-garde, thanks in part to her incredible exploration of extended vocal technique and the fundamentals of music.

Represented in USA and Canada only

Thorvaldsdottir’s work is inspired by the astounding elemental environment of her native Iceland. Performed by the world’s leading orchestras, she is one of contemporary music’s most sought-after creative minds. Key Works AERIALITY (2011) 13 mins 2+afl.1+ca.2+bcl.2+cbn/4221/timp.3perc/hp.pf/str In the Light of Air (2014) 40 mins perc/hp.pf/va.vc/electronics METACOSMOS (2017) 14 mins 4(pic.afl).2+ca.3+bcl.4+cbn/4222/3perc/str

Intensely inspired by the myths and the nature of her native Lapland, Outi Tarkiainen writes music with roots as deep as the mosses and birch trees of the region. Having studied at the Sibelius Academy, the Guildhall School School of Music and Drama and the University of Miami, she has composed for everything from big bands to chamber groups and symphony orchestras, always writing music of depth and beauty. Key Works The Earth, Spring's Daughter (2015) 41 mins mezzo soprano; 1(pic.afl)1(ca)1(bcl)1(cbn)/1000/perc/cel(pf)/str Saivo (2017) 27 mins soprano saxophone; 2(pic)2(ca)2(bcl)2(cbn)/2200/perc/cel(pf)/str The Lustful Mother (2018) 30 mins baritone; pf/str

A catalogue highlighting the key works of female composers published by Wise Music Group, complete with links to audio and work pages. This...

A catalogue highlighting the key works of female composers published by Wise Music Group, complete with links to audio and work pages. This...