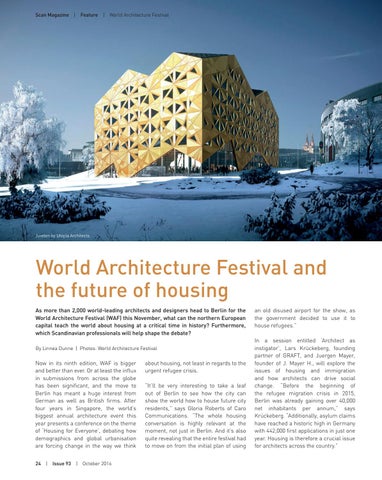 Now in its ninth edition, WAF is bigger and better than ever. Or at least the influx in submissions from across the globe has been significant, and the move to Berlin has meant a huge interest from German as well as British firms. After four years in Singapore, the world’s biggest annual architecture event this year presents a conference on the theme of ‘Housing for Everyone’, debating how demographics and global urbanisation are forcing change in the way we think 24  |  Issue 93  |  October 2016

about housing, not least in regards to the urgent refugee crisis. “It’ll be very interesting to take a leaf out of Berlin to see how the city can show the world how to house future city residents,” says Gloria Roberts of Caro Communications. “The whole housing conversation is highly relevant at the moment, not just in Berlin. And it’s also quite revealing that the entire festival had to move on from the initial plan of using

an old disused airport for the show, as the government decided to use it to house refugees.” In a session entitled ‘Architect as instigator’, Lars Krückeberg, founding partner of GRAFT, and Juergen Mayer, founder of J. Mayer H., will explore the issues of housing and immigration and how architects can drive social change. “Before the beginning of the refugee migration crisis in 2015, Berlin was already gaining over 40,000 net inhabitants per annum,” says Krückeberg. “Additionally, asylum claims have reached a historic high in Germany with 442,000 first applications in just one year. Housing is therefore a crucial issue for architects across the country.”