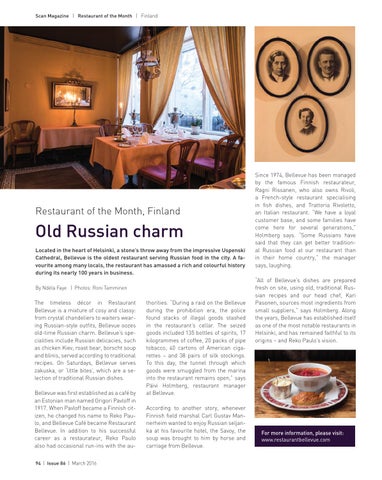 Restaurant of the Month, Finland

Old Russian charm Located in the heart of Helsinki, a stone’s throw away from the impressive Uspenski Cathedral, Bellevue is the oldest restaurant serving Russian food in the city. A favourite among many locals, the restaurant has amassed a rich and colourful history during its nearly 100 years in business. By Ndéla Faye | Photos: Roni Tamminen

The timeless décor in Restaurant Bellevue is a mixture of cosy and classy: from crystal chandeliers to waiters wearing Russian-style outfits, Bellevue oozes old-time Russian charm. Bellevue’s specialities include Russian delicacies, such as chicken Kiev, roast bear, borscht soup and blinis, served according to traditional recipes. On Saturdays, Bellevue serves zakuska, or ‘little bites’, which are a selection of traditional Russian dishes. Bellevue was first established as a café by an Estonian man named Grigori Pavloff in 1917. When Pavloff became a Finnish citizen, he changed his name to Reko Paulo, and Bellevue Café became Restaurant Bellevue. In addition to his successful career as a restaurateur, Reko Paulo also had occasional run-ins with the au94 | Issue 86 | March 2016

thorities. “During a raid on the Bellevue during the prohibition era, the police found stacks of illegal goods stashed in the restaurant’s cellar. The seized goods included 135 bottles of spirits, 17 kilogrammes of coffee, 20 packs of pipe tobacco, 40 cartons of American cigarettes – and 38 pairs of silk stockings. To this day, the tunnel through which goods were smuggled from the marina into the restaurant remains open,” says Päivi Holmberg, restaurant manager at Bellevue. According to another story, whenever Finnish field marshal Carl Gustav Mannerheim wanted to enjoy Russian seljanka at his favourite hotel, the Savoy, the soup was brought to him by horse and carriage from Bellevue.

Since 1974, Bellevue has been managed by the famous Finnish restaurateur, Ragni Rissanen, who also owns Rivoli, a French-style restaurant specialising in fish dishes, and Trattoria Rivoletto, an Italian restaurant. “We have a loyal customer base, and some families have come here for several generations,” Holmberg says. “Some Russians have said that they can get better traditional Russian food at our restaurant than in their home country,” the manager says, laughing. “All of Bellevue’s dishes are prepared fresh on site, using old, traditional Russian recipes and our head chef, Kari Pasonen, sources most ingredients from small suppliers,” says Holmberg. Along the years, Bellevue has established itself as one of the most notable restaurants in Helsinki, and has remained faithful to its origins – and Reko Paulo’s vision.