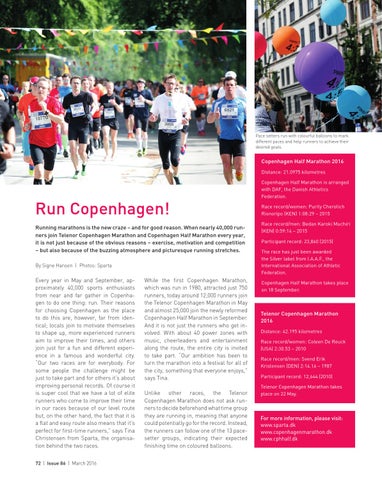 Run Copenhagen! Running marathons is the new craze – and for good reason. When nearly 40,000 runners join Telenor Copenhagen Marathon and Copenhagen Half Marathon every year, it is not just because of the obvious reasons – exercise, motivation and competition – but also because of the buzzing atmosphere and picturesque running stretches. By Signe Hansen | Photos: Sparta

Every year in May and September, approximately 40,000 sports enthusiasts from near and far gather in Copenhagen to do one thing: run. Their reasons for choosing Copenhagen as the place to do this are, however, far from identical; locals join to motivate themselves to shape up, more experienced runners aim to improve their times, and others join just for a fun and different experience in a famous and wonderful city. “Our two races are for everybody. For some people the challenge might be just to take part and for others it’s about improving personal records. Of course it is super cool that we have a lot of elite runners who come to improve their time in our races because of our level route but, on the other hand, the fact that it is a flat and easy route also means that it’s perfect for first-time runners,” says Tina Christensen from Sparta, the organisation behind the two races. 72 | Issue 86 | March 2016

While the first Copenhagen Marathon, which was run in 1980, attracted just 750 runners, today around 12,000 runners join the Telenor Copenhagen Marathon in May and almost 25,000 join the newly reformed Copenhagen Half Marathon in September. And it is not just the runners who get involved. With about 40 power zones with music, cheerleaders and entertainment along the route, the entire city is invited to take part. “Our ambition has been to turn the marathon into a festival for all of the city, something that everyone enjoys,” says Tina. Unlike other races, the Telenor Copenhagen Marathon does not ask runners to decide beforehand what time group they are running in, meaning that anyone could potentially go for the record. Instead, the runners can follow one of the 13 pacesetter groups, indicating their expected finishing time on coloured balloons.