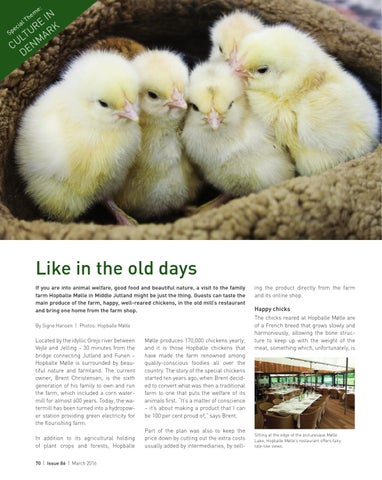 Like in the old days If you are into animal welfare, good food and beautiful nature, a visit to the family farm Hopballe Mølle in Middle Jutland might be just the thing. Guests can taste the main produce of the farm, happy, well-reared chickens, in the old mill’s restaurant and bring one home from the farm shop. By Signe Hansen | Photos: Hopballe Mølle

Located by the idyllic Grejs river between Vejle and Jelling – 30 minutes from the bridge connecting Jutland and Funen – Hopballe Mølle is surrounded by beautiful nature and farmland. The current owner, Brent Christensen, is the sixth generation of his family to own and run the farm, which included a corn watermill for almost 600 years. Today, the watermill has been turned into a hydropower station providing green electricity for the flourishing farm. In addition to its agricultural holding of plant crops and forests, Hopballe 70 | Issue 86 | March 2016

Mølle produces 170,000 chickens yearly, and it is those Hopballe chickens that have made the farm renowned among quality-conscious foodies all over the country. The story of the special chickens started ten years ago, when Brent decided to convert what was then a traditional farm to one that puts the welfare of its animals first. “It’s a matter of conscience – it’s about making a product that I can be 100 per cent proud of,” says Brent. Part of the plan was also to keep the price down by cutting out the extra costs usually added by intermediaries, by sell-

ing the product directly from the farm and its online shop.

Happy chicks The chicks reared at Hopballe Mølle are of a French breed that grows slowly and harmoniously, allowing the bone structure to keep up with the weight of the meat, something which, unfortunately, is