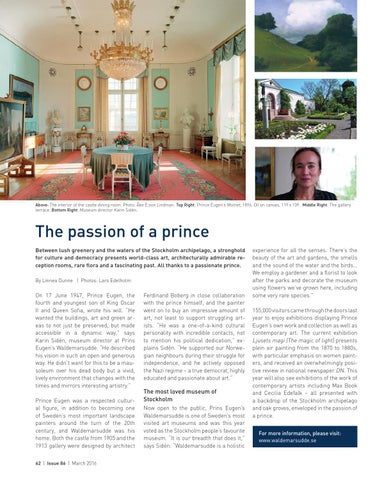 The passion of a prince Between lush greenery and the waters of the Stockholm archipelago, a stronghold for culture and democracy presents world-class art, architecturally admirable reception rooms, rare flora and a fascinating past. All thanks to a passionate prince. By Linnea Dunne | Photos: Lars Edelholm

On 17 June 1947, Prince Eugen, the fourth and youngest son of King Oscar II and Queen Sofia, wrote his will. “He wanted the buildings, art and green areas to not just be preserved, but made accessible in a dynamic way,” says Karin Sidén, museum director at Prins Eugen’s Waldemarsudde. “He described his vision in such an open and generous way. He didn’t want for this to be a mausoleum over his dead body but a vivid, lively environment that changes with the times and mirrors interesting artistry.” Prince Eugen was a respected cultural figure, in addition to becoming one of Sweden’s most important landscape painters around the turn of the 20th century, and Waldemarsudde was his home. Both the castle from 1905 and the 1913 gallery were designed by architect 62 | Issue 86 | March 2016

Ferdinand Boberg in close collaboration with the prince himself, and the painter went on to buy an impressive amount of art, not least to support struggling artists. “He was a one-of-a-kind cultural personality with incredible contacts, not to mention his political dedication,” explains Sidén. “He supported our Norwegian neighbours during their struggle for independence, and he actively opposed the Nazi regime – a true democrat, highly educated and passionate about art.”

The most loved museum of Stockholm Now open to the public, Prins Eugen’s Waldemarsudde is one of Sweden’s most visited art museums and was this year voted as the Stockholm people’s favourite museum. “It is our breadth that does it,” says Sidén. “Waldemarsudde is a holistic

experience for all the senses. There’s the beauty of the art and gardens, the smells and the sound of the water and the birds… We employ a gardener and a florist to look after the parks and decorate the museum using flowers we’ve grown here, including some very rare species.” 155,000 visitors came through the doors last year to enjoy exhibitions displaying Prince Eugen’s own work and collection as well as contemporary art. The current exhibition Ljusets magi (The magic of light) presents plein air painting from the 1870 to 1880s, with particular emphasis on women painters, and received an overwhelmingly positive review in national newspaper DN. This year will also see exhibitions of the work of contemporary artists including Max Book and Cecilia Edefalk – all presented with a backdrop of the Stockholm archipelago and oak groves, enveloped in the passion of a prince. For more information, please visit: www.waldemarsudde.se