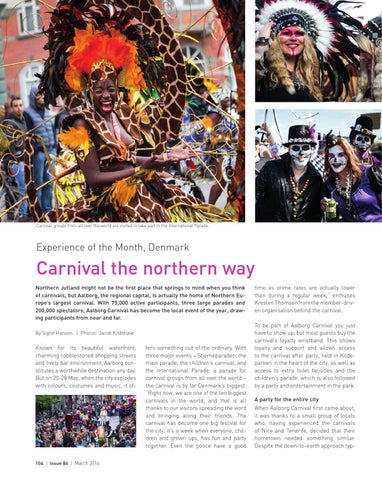 Carnival groups from all over the world are invited to take part in the International Parade.

Experience of the Month, Denmark

Carnival the northern way Northern Jutland might not be the first place that springs to mind when you think of carnivals, but Aalborg, the regional capital, is actually the home of Northern Europe’s largest carnival. With 75,000 active participants, three large parades and 200,000 spectators, Aalborg Carnival has become the local event of the year, drawing participants from near and far. By Signe Hansen | Photos: Jacob Kildehave

Known for its beautiful waterfront, charming cobblestoned shopping streets and lively bar environment, Aalborg constitutes a worthwhile destination any day. But on 20-28 May, when the city explodes with colours, costumes and music, it of-

fers something out of the ordinary. With three major events – Stjerneparaden, the main parade; the children’s carnival; and the International Parade, a parade for carnival groups from all over the world – the carnival is by far Denmark’s biggest. “Right now, we are one of the ten biggest carnivals in the world, and that is all thanks to our visitors spreading the word and bringing along their friends. The carnival has become one big festival for the city; it’s a week when everyone, children and grown-ups, has fun and party together. Even the police have a good

time as crime rates are actually lower than during a regular week,” enthuses Kresten Thomsen from the member-driven organisation behind the carnival. To be part of Aalborg Carnival you just have to show up, but most guests buy the carnival’s loyalty wristband. This shows loyalty and support and allows access to the carnival after party, held in Kildeparken in the heart of the city, as well as access to extra toilet facilities and the children’s parade, which is also followed by a party and entertainment in the park. A party for the entire city When Aalborg Carnival first came about, it was thanks to a small group of locals who, having experienced the carnivals of Nice and Tenerife, decided that their hometown needed something similar. Despite the down-to-earth approach typ-