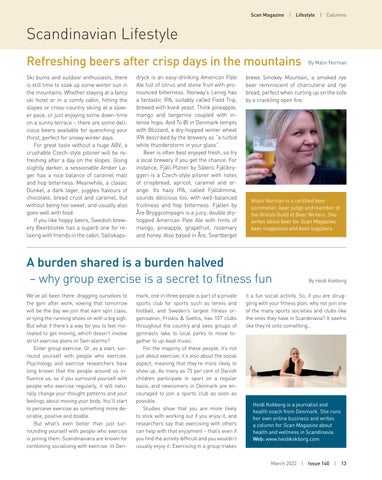 Scandinavian Lifestyle Refreshing beers after crisp days in the mountains Ski bums and outdoor enthusiasts, there is still time to soak up some winter sun in the mountains. Whether staying at a fancy ski hotel or in a comfy cabin, hitting the slopes or cross-country skiing at a slower pace, or just enjoying some down-time on a sunny terrace – there are some delicious beers available for quenching your thirst, perfect for snowy winter days. For great taste without a huge ABV, a crushable Czech-style pilsner will be refreshing after a day on the slopes. Going slightly darker, a sessionable Amber Lager has a nice balance of caramel malt and hop bitterness. Meanwhile, a classic Dunkel, a dark lager, juggles flavours of chocolate, bread crust and caramel, but without being too sweet, and usually also goes well with food. If you like hoppy beers, Swedish brewery Beerbliotek has a superb one for relaxing with friends in the cabin. Sällskaps-

dryck is an easy-drinking American Pale Ale full of citrus and stone fruit with pronounced bitterness. Norway’s Lervig has a fantastic IPA, suitably called Field Trip, brewed with kveik yeast. Think pineapple, mango and tangerine coupled with intense hops. And To Øl in Denmark tempts with Blizzard, a dry-hopped winter wheat IPA described by the brewery as “a turbid white thunderstorm in your glass”. Beer is often best enjoyed fresh, so try a local brewery if you get the chance. For instance, Fjäll-Plzner by Sälens Fjällbryggeri is a Czech-style pilsner with notes of crispbread, apricot, caramel and orange. Its hazy IPA, called Fjälldimma, sounds delicious too, with well-balanced fruitiness and hop bitterness. Fjällen by Åre Bryggcompagni is a juicy, double dryhopped American Pale Ale with hints of mango, pineapple, grapefruit, rosemary and honey. Also based in Åre, Svartberget

brews Smokey Mountain, a smoked rye beer reminiscent of charcuterie and rye bread, perfect when curling up on the sofa by a crackling open fire.

Malin Norman is a certified beer sommelier, beer judge and member of the British Guild of Beer Writers. She writes about beer for Scan Magazine, beer magazines and beer suppliers.

A burden shared is a burden halved – why group exercise is a secret to fitness fun We’ve all been there: dragging ourselves to the gym after work, vowing that tomorrow will be the day we join that 6am spin class, or tying the running shoes on with a big sigh. But what if there’s a way for you to feel motivated to get moving, which doesn’t involve strict exercise plans or 5am alarms? Enter group exercise. Or, as a start, surround yourself with people who exercise. Psychology and exercise researchers have long known that the people around us influence us, so if you surround yourself with people who exercise regularly, it will naturally change your thought patterns and your feelings about moving your body. You’ll start to perceive exercise as something more desirable, positive and doable. But what’s even better than just surrounding yourself with people who exercise is joining them. Scandinavians are known for combining socialising with exercise. In Den-

mark, one in three people is part of a private sports club for sports such as tennis and football, and Sweden’s largest fitness organisation, Friskis &amp; Svettis, has 107 clubs throughout the country and sees groups of gymnasts take to local parks to move together to up-beat music. For the majority of these people, it’s not just about exercise; it’s also about the social aspect, meaning that they’re more likely to show up. As many as 75 per cent of Danish children participate in sport on a regular basis, and newcomers in Denmark are encouraged to join a sports club as soon as possible. Studies show that you are more likely to stick with working out if you enjoy it, and researchers say that exercising with others can help with that enjoyment – that’s even if you find the activity difficult and you wouldn’t usually enjoy it. Exercising in a group makes

it a fun social activity. So, if you are struggling with your fitness plan, why not join one of the many sports societies and clubs like the ones they have in Scandinavia? It seems like they’re onto something…

Heidi Kokborg is a journalist and health coach from Denmark. She runs her own online business and writes a column for Scan Magazine about health and wellness in Scandinavia. Web: www.heidikokborg.com