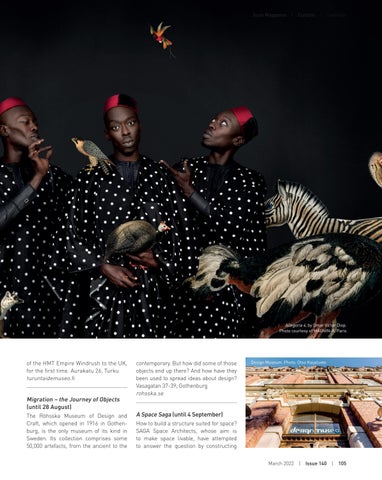 of the HMT Empire Windrush to the UK, for the first time. Aurakatu 26, Turku turuntaidemuseo.fi

Migration – the Journey of Objects (until 28 August) The Röhsska Museum of Design and Craft, which opened in 1916 in Gothenburg, is the only museum of its kind in Sweden. Its collection comprises some 50,000 artefacts, from the ancient to the

contemporary. But how did some of those objects end up there? And how have they been used to spread ideas about design? Vasagatan 37-39, Gothenburg rohsska.se

A Space Saga (until 4 September) How to build a structure suited for space? SAGA Space Architects, whose aim is to make space livable, have attempted to answer the question by constructing March 2022