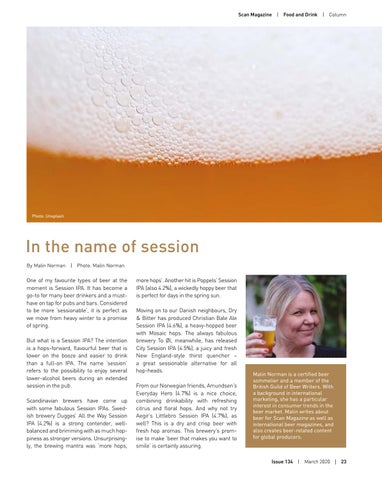 One of my favourite types of beer at the moment is Session IPA. It has become a go-to for many beer drinkers and a musthave on tap for pubs and bars. Considered to be more ‘sessionable’, it is perfect as we move from heavy winter to a promise of spring. But what is a Session IPA? The intention is a hops-forward, flavourful beer that is lower on the booze and easier to drink than a full-on IPA. The name ‘session’ refers to the possibility to enjoy several lower-alcohol beers during an extended session in the pub. Scandinavian brewers have come up with some fabulous Session IPAs. Swedish brewery Dugges’ All the Way Session IPA (4.2%) is a strong contender, well-  balanced and brimming with as much hoppiness as stronger versions. Unsurprisingly, the brewing mantra was ‘more hops,

more hops’. Another hit is Poppels’ Session IPA (also 4.2%), a wickedly hoppy beer that is perfect for days in the spring sun. Moving on to our Danish neighbours, Dry & Bitter has produced Christian Bale Ale Session IPA (4.6%), a heavy-hopped beer with Mosaic hops. The always fabulous brewery To Øl, meanwhile, has released City Session IPA (4.5%), a juicy and fresh New England-style thirst quencher –  a great sessionable alternative for all  hop-heads. From our Norwegian friends, Amundsen’s Everyday Hero (4.7%) is a nice choice, combining drinkability with refreshing citrus and floral hops. And why not try  Aegir’s Littlebro Session IPA (4.7%), as well? This is a dry and crisp beer with fresh hop aromas. This brewery’s promise to make ‘beer that makes you want to smile’ is certainly assuring.

Malin Norman is a certified beer sommelier and a member of the British Guild of Beer Writers. With a background in international marketing, she has a particular interest in consumer trends in the beer market. Malin writes about beer for Scan Magazine as well as international beer magazines, and also creates beer-related content for global producers.