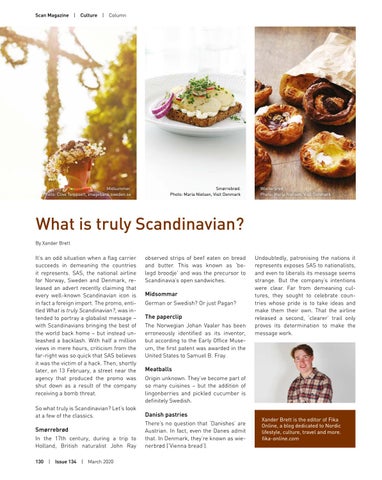 What is truly Scandinavian? By Xander Brett

It’s an odd situation when a flag carrier succeeds in demeaning the countries it represents. SAS, the national airline for Norway, Sweden and Denmark, released an advert recently claiming that every well-known Scandinavian icon is in fact a foreign import. The promo, entitled What is truly Scandinavian?, was intended to portray a globalist message – with Scandinavians bringing the best of the world back home – but instead unleashed a backlash. With half a million views in mere hours, criticism from the far-right was so quick that SAS believes it was the victim of a hack. Then, shortly later, on 13 February, a street near the agency that produced the promo was shut down as a result of the company receiving a bomb threat. So what truly is Scandinavian? Let’s look at a few of the classics.

observed strips of beef eaten on bread and butter. This was known as ‘belegd broodje’ and was the precursor to  Scandinavia’s open sandwiches.

The paperclip The Norwegian Johan Vaaler has been erroneously identified as its inventor, but according to the Early Office Museum, the first patent was awarded in the United States to Samuel B. Fray.

Undoubtedly, patronising the nations it represents exposes SAS to nationalists, and even to liberals its message seems strange. But the company’s intentions were clear. Far from demeaning cultures, they sought to celebrate countries whose pride is to take ideas and make them their own. That the airline released a second, ‘clearer’ trail only proves its determination to make the message work.

Meatballs Origin unknown. They’ve become part of so many cuisines – but the addition of lingonberries and pickled cucumber is definitely Swedish.

Danish pastries There’s no question that ‘Danishes’ are Austrian. In fact, even the Danes admit that. In Denmark, they’re known as wienerbrød (‘Vienna bread’).

Xander Brett is the editor of Fika Online, a blog dedicated to Nordic lifestyle, culture, travel and more. fika-online.com