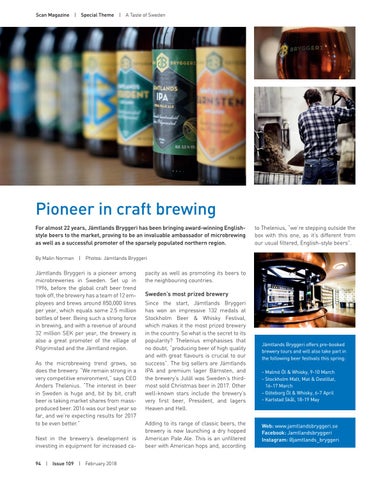 Pioneer in craft brewing For almost 22 years, Jämtlands Bryggeri has been bringing award-winning Englishstyle beers to the market, proving to be an invaluable ambassador of microbrewing as well as a successful promoter of the sparsely populated northern region.

to Thelenius, “we’re stepping outside the box with this one, as it’s different from our usual filtered, English-style beers”.

Jämtlands Bryggeri is a pioneer among microbreweries in Sweden. Set up in 1996, before the global craft beer trend took off, the brewery has a team of 12 employees and brews around 850,000 litres per year, which equals some 2.5 million bottles of beer. Being such a strong force in brewing, and with a revenue of around 32 million SEK per year, the brewery is also a great promoter of the village of Pilgrimstad and the Jämtland region. As the microbrewing trend grows, so does the brewery. “We remain strong in a very competitive environment,” says CEO Anders Thelenius. “The interest in beer in Sweden is huge and, bit by bit, craft beer is taking market shares from massproduced beer. 2016 was our best year so far, and we’re expecting results for 2017 to be even better.” Next in the brewery’s development is investing in equipment for increased ca94  |  Issue 109  |  February 2018

pacity as well as promoting its beers to the neighbouring countries.

Sweden’s most prized brewery Since the start, Jämtlands Bryggeri has won an impressive 132 medals at Stockholm Beer &amp; Whisky Festival, which makes it the most prized brewery in the country. So what is the secret to its popularity? Thelenius emphasises that no doubt, “producing beer of high quality and with great flavours is crucial to our success”. The big sellers are Jämtlands IPA and premium lager Bärnsten, and the brewery’s Julöl was Sweden’s thirdmost sold Christmas beer in 2017. Other well-known stars include the brewery’s very first beer, President, and lagers Heaven and Hell. Adding to its range of classic beers, the brewery is now launching a dry hopped American Pale Ale. This is an unfiltered beer with American hops and, according