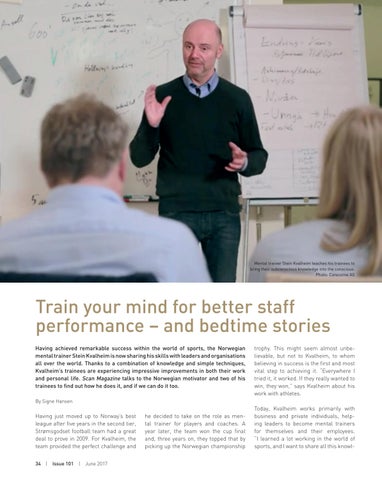 Mental trainer Stein Kvalheim teaches his trainees to bring their subconscious knowledge into the conscious. Photo: Corecome AS

Train your mind for better staff performance – and bedtime stories Having achieved remarkable success within the world of sports, the Norwegian mental trainer Stein Kvalheim is now sharing his skills with leaders and organisations all over the world. Thanks to a combination of knowledge and simple techniques, Kvalheim’s trainees are experiencing impressive improvements in both their work and personal life. Scan Magazine talks to the Norwegian motivator and two of his trainees to find out how he does it, and if we can do it too.

trophy. This might seem almost unbelievable, but not to Kvalheim, to whom believing in success is the first and most vital step to achieving it. “Everywhere I tried it, it worked. If they really wanted to win, they won,” says Kvalheim about his work with athletes.

Having just moved up to Norway’s best league after five years in the second tier, Strømsgodset football team had a great deal to prove in 2009. For Kvalheim, the team provided the perfect challenge and 34  |  Issue 101  |  June 2017

he decided to take on the role as mental trainer for players and coaches. A year later, the team won the cup final and, three years on, they topped that by picking up the Norwegian championship

Today, Kvalheim works primarily with business and private individuals, helping leaders to become mental trainers for themselves and their employees. “I learned a lot working in the world of sports, and I want to share all this knowl-