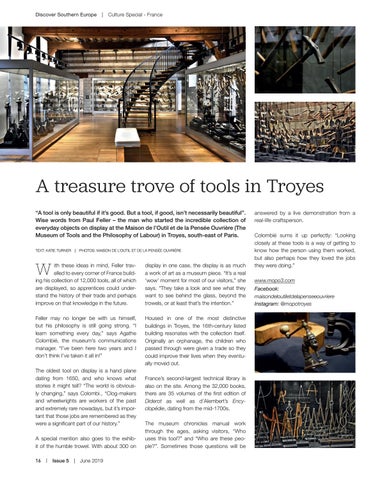 ith these ideas in mind, Feller travelled to every corner of France building his collection of 12,000 tools, all of which are displayed, so apprentices could understand the history of their trade and perhaps improve on that knowledge in the future.

display in one case, the display is as much a work of art as a museum piece. “It’s a real ‘wow’ moment for most of our visitors,” she says. “They take a look and see what they want to see behind the glass, beyond the trowels, or at least that’s the intention.”

Feller may no longer be with us himself, but his philosophy is still going strong. “I learn something every day,” says Agathe Colombié, the museum’s communications manager. “I’ve been here two years and I don’t think I’ve taken it all in!”

Housed in one of the most distinctive buildings in Troyes, the 16th-century listed building resonates with the collection itself. Originally an orphanage, the children who passed through were given a trade so they could improve their lives when they eventually moved out.

The oldest tool on display is a hand plane dating from 1650, and who knows what stories it might tell? “The world is obviously changing,” says Colombi., “Clog-makers and wheelwrights are workers of the past and extremely rare nowadays, but it’s important that those jobs are remembered as they were a significant part of our history.” A special mention also goes to the exhibit of the humble trowel. With about 300 on 16  |  Issue 5  |  June 2019

France’s second-largest technical library is also on the site. Among the 32,000 books, there are 35 volumes of the first edition of Diderot as well as d’Alembert’s Encyclopédie, dating from the mid-1700s. The museum chronicles manual work through the ages, asking visitors, “Who uses this tool?” and “Who are these people?”. Sometimes those questions will be

answered by a live demonstration from a real-life craftsperson. Colombié sums it up perfectly: “Looking closely at these tools is a way of getting to know how the person using them worked, but also perhaps how they loved the jobs they were doing.” www.mopo3.com Facebook: maisondeloutiletdelapenseeouvriere Instagram: @mopotroyes