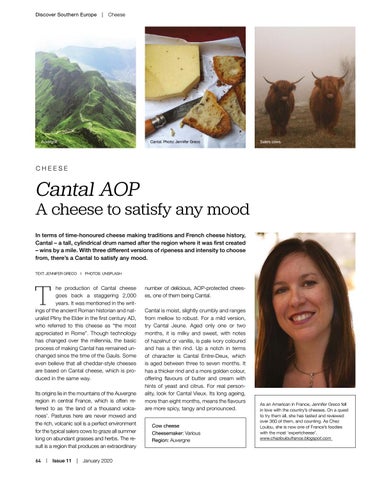 A cheese to satisfy any mood In terms of time-honoured cheese making traditions and French cheese history, Cantal – a tall, cylindrical drum named after the region where it was first created – wins by a mile. With three different versions of ripeness and intensity to choose from, there’s a Cantal to satisfy any mood. TEXT: JENNIFER GRECO  I  PHOTOS: UNSPLASH

he production of Cantal cheese goes back a staggering 2,000 years. It was mentioned in the writings of the ancient Roman historian and naturalist Pliny the Elder in the first century AD, who referred to this cheese as “the most appreciated in Rome”. Though technology has changed over the millennia, the basic process of making Cantal has remained unchanged since the time of the Gauls. Some even believe that all cheddar-style cheeses are based on Cantal cheese, which is produced in the same way. Its origins lie in the mountains of the Auvergne region in central France, which is often referred to as ‘the land of a thousand volcanoes’. Pastures here are never mowed and the rich, volcanic soil is a perfect environment for the typical salers cows to graze all summer long on abundant grasses and herbs. The result is a region that produces an extraordinary 64  |  Issue 11  |  January 2020

number of delicious, AOP-protected cheeses, one of them being Cantal. Cantal is moist, slightly crumbly and ranges from mellow to robust. For a mild version, try Cantal Jeune. Aged only one or two months, it is milky and sweet, with notes of hazelnut or vanilla, is pale ivory coloured and has a thin rind. Up a notch in terms of character is Cantal Entre-Deux, which is aged between three to seven months. It has a thicker rind and a more golden colour, offering flavours of butter and cream with hints of yeast and citrus. For real personality, look for Cantal Vieux. Its long ageing, more than eight months, means the flavours are more spicy, tangy and pronounced. Cow cheese Cheesemaker: Various Region: Auvergne