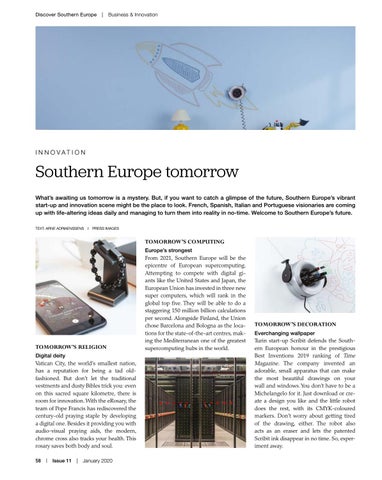 Southern Europe tomorrow What’s awaiting us tomorrow is a mystery. But, if you want to catch a glimpse of the future, Southern Europe’s vibrant start-up and innovation scene might be the place to look. French, Spanish, Italian and Portuguese visionaries are coming up with life-altering ideas daily and managing to turn them into reality in no-time. Welcome to Southern Europe’s future. TEXT: ARNE ADRIAENSSENS  I  PRESS IMAGES

Vatican City, the world’s smallest nation, has a reputation for being a tad oldfashioned. But don’t let the traditional vestments and dusty Bibles trick you: even on this sacred square kilometre, there is room for innovation. With the eRosary, the team of Pope Francis has rediscovered the century-old praying staple by developing a digital one. Besides it providing you with audio-visual praying aids, the modern, chrome cross also tracks your health. This rosary saves both body and soul. 58  |  Issue 11  |  January 2020

From 2021, Southern Europe will be the epicentre of European supercomputing. Attempting to compete with digital giants like the United States and Japan, the European Union has invested in three new super computers, which will rank in the global top five. They will be able to do a staggering 150 million billion calculations per second. Alongside Finland, the Union chose Barcelona and Bologna as the locations for the state-of-the-art centres, making the Mediterranean one of the greatest supercomputing hubs in the world.

Turin start-up Scribit defends the Southern European honour in the prestigious Best Inventions 2019 ranking of Time Magazine. The company invented an adorable, small apparatus that can make the most beautiful drawings on your wall and windows. You don’t have to be a Michelangelo for it. Just download or create a design you like and the little robot does the rest, with its CMYK-coloured markers. Don’t worry about getting tired of the drawing, either. The robot also acts as an eraser and lets the patented Scribit ink disappear in no time. So, experiment away.

Travel more! Do sports! Study harder! Undertake a pilgrimage! … With this January issue, we are destined to help you achieve all those New Year’s resolutions. We head from Barcelona to Strasbourg and go for a mountain hike. We study English and French at France’s best bilingual schools and even walk the Camino de Santiago. Kick-off the new decade in style and join us on our unforgettable January journey.