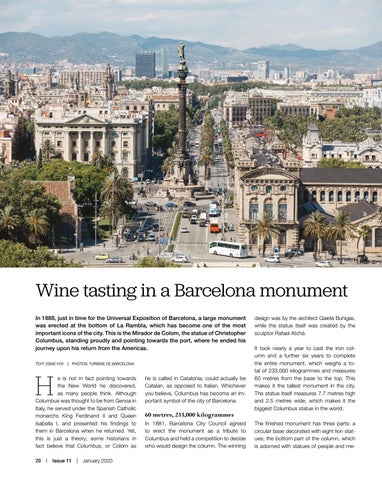 Wine tasting in a Barcelona monument In 1888, just in time for the Universal Exposition of Barcelona, a large monument was erected at the bottom of La Rambla, which has become one of the most important icons of the city. This is the Mirador de Colom, the statue of Christopher Columbus, standing proudly and pointing towards the port, where he ended his journey upon his return from the Americas. TEXT: ESME FOX  |  PHOTOS: TURISME DE BARCELONA

e is not in fact pointing towards the New World he discovered, as many people think. Although Columbus was thought to be from Genoa in Italy, he served under the Spanish Catholic monarchs King Ferdinand II and Queen Isabella I, and presented his findings to them in Barcelona when he returned. Yet, this is just a theory; some historians in fact believe that Columbus, or Colom as 20  |  Issue 11  |  January 2020

he is called in Catalonia, could actually be Catalan, as opposed to Italian. Whichever you believe, Columbus has become an important symbol of the city of Barcelona.

60 metres, 233,000 kilogrammes In 1881, Barcelona City Council agreed to erect the monument as a tribute to Columbus and held a competition to decide who would design the column. The winning

design was by the architect Gaietà Buhigas, while the statue itself was created by the sculptor Rafael Atché. It took nearly a year to cast the iron column and a further six years to complete the entire monument, which weighs a total of 233,000 kilogrammes and measures 60 metres from the base to the top. This makes it the tallest monument in the city. The statue itself measures 7.7 metres high and 2.5 metres wide, which makes it the biggest Columbus statue in the world. The finished monument has three parts: a circular base decorated with eight lion statues; the bottom part of the column, which is adorned with statues of people and me-