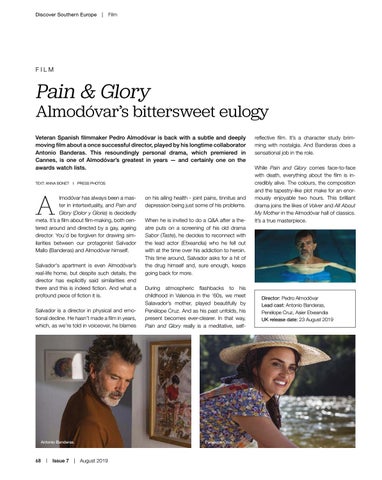 Almodóvar’s bittersweet eulogy Veteran Spanish filmmaker Pedro Almodóvar is back with a subtle and deeply moving film about a once successful director, played by his longtime collaborator Antonio Banderas. This resoundingly personal drama, which premiered in Cannes, is one of Almodóvar’s greatest in years — and certainly one on the awards watch lists. TEXT: ANNA BONET  I  PRESS PHOTOS

lmodóvar has always been a master in intertextuality, and Pain and Glory (Dolor y Gloria) is decidedly meta. It’s a film about film-making, both centered around and directed by a gay, ageing director. You’d be forgiven for drawing similarities between our protagonist Salvador Mallo (Banderas) and Almodóvar himself. Salvador&#39;s apartment is even Almodóvar’s real-life home, but despite such details, the director has explicitly said similarities end there and this is indeed fiction. And what a profound piece of fiction it is. Salvador is a director in physical and emotional decline. He hasn’t made a film in years, which, as we’re told in voiceover, he blames

on his ailing health - joint pains, tinnitus and depression being just some of his problems. When he is invited to do a Q&amp;A after a theatre puts on a screening of his old drama Sabor (Taste), he decides to reconnect with the lead actor (Etxeandia) who he fell out with at the time over his addiction to heroin. This time around, Salvador asks for a hit of the drug himself and, sure enough, keeps going back for more. During atmospheric flashbacks to his childhood in Valencia in the ‘60s, we meet Salavador’s mother, played beautifully by Penélope Cruz. And as his past unfolds, his present becomes ever-clearer. In that way, Pain and Glory really is a meditative, self-

reflective film. It’s a character study brimming with nostalgia. And Banderas does a sensational job in the role. While Pain and Glory comes face-to-face with death, everything about the film is incredibly alive. The colours, the composition and the tapestry-like plot make for an enormously enjoyable two hours. This brilliant drama joins the likes of Volver and All About My Mother in the Almodóvar hall of classics. It’s a true masterpiece.