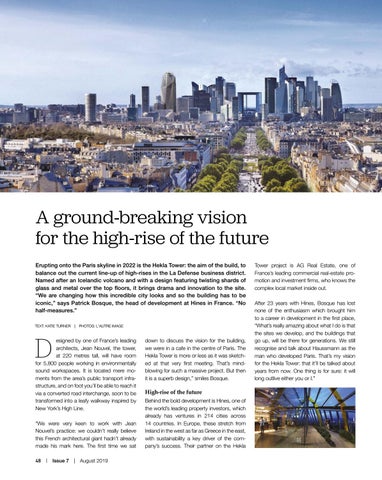 A ground-breaking vision for the high-rise of the future Erupting onto the Paris skyline in 2022 is the Hekla Tower: the aim of the build, to balance out the current line-up of high-rises in the La Defense business district. Named after an Icelandic volcano and with a design featuring twisting shards of glass and metal over the top floors, it brings drama and innovation to the site. “We are changing how this incredible city looks and so the building has to be iconic,” says Patrick Bosque, the head of development at Hines in France. “No half-measures.” TEXT: KATIE TURNER  |  PHOTOS: L&#39;AUTRE IMAGE

esigned by one of France’s leading architects, Jean Nouvel, the tower, at 220 metres tall, will have room for 5,800 people working in environmentally sound workspaces. It is located mere moments from the area’s public transport infrastructure, and on foot you’ll be able to reach it via a converted road interchange, soon to be transformed into a leafy walkway inspired by New York’s High Line. “We were very keen to work with Jean Nouvel’s practice: we couldn’t really believe this French architectural giant hadn’t already made his mark here. The first time we sat 48  |  Issue 7  |  August 2019

down to discuss the vision for the building, we were in a cafe in the centre of Paris. The Hekla Tower is more or less as it was sketched at that very first meeting. That’s mindblowing for such a massive project. But then it is a superb design,” smiles Bosque.

High-rise of the future Behind the bold development is Hines, one of the world’s leading property investors, which already has ventures in 214 cities across 14 countries. In Europe, these stretch from Ireland in the west as far as Greece in the east, with sustainability a key driver of the company’s success. Their partner on the Hekla

Tower project is AG Real Estate, one of France’s leading commercial real-estate promotion and investment firms, who knows the complex local market inside out. After 23 years with Hines, Bosque has lost none of the enthusiasm which brought him to a career in development in the first place, “What’s really amazing about what I do is that the sites we develop, and the buildings that go up, will be there for generations. We still recognise and talk about Haussmann as the man who developed Paris. That’s my vision for the Hekla Tower: that it’ll be talked about years from now. One thing is for sure: it will long outlive either you or I.”