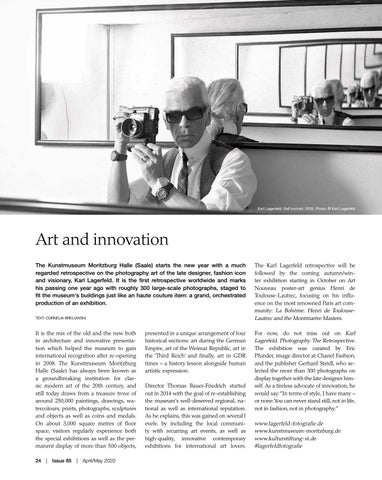 Art and innovation The Kunstmuseum Moritzburg Halle (Saale) starts the new year with a much regarded retrospective on the photography art of the late designer, fashion icon and visionary, Karl Lagerfeld. It is the first retrospective worldwide and marks his passing one year ago with roughly 300 large-scale photographs, staged to fit the museum‘s buildings just like an haute couture item: a grand, orchestrated production of an exhibition. TEXT: CORNELIA BRELOWSKI

It is the mix of the old and the new both in architecture and innovative presentation which helped the museum to gain international recognition after re-opening in 2008. The Kunstmuseum Moritzburg Halle (Saale) has always been known as a groundbreaking institution for classic modern art of the 20th century, and still today draws from a treasure trove of around 250,000 paintings, drawings, watercolours, prints, photographs, sculptures and objects as well as coins and medals. On about 3,000 square metres of floor space, visitors regularly experience both the special exhibitions as well as the permanent display of more than 500 objects, 24  |  Issue 85  |  April/May 2020

presented in a unique arrangement of four historical sections: art during the German Empire, art of the Weimar Republic, art in the ‘Third Reich’ and finally, art in GDR times – a history lesson alongside human artistic expression. Director Thomas Bauer-Friedrich started out in 2014 with the goal of re-establishing the museum’s well-deserved regional, national as well as international reputation. As he explains, this was gained on several l evels: by including the local community with recurring art events, as well as high-quality, innovative contemporary exhibitions for international art lovers.

The Karl Lagerfeld retrospective will be followed by the coming autumn/winter exhibition starting in October on Art Nouveau poster-art genius Henri de Toulouse-Lautrec, focusing on his influence on the most renowned Paris art community: La Bohème. Henri de ToulouseLautrec and the Montmartre Masters. For now, do not miss out on Karl Lagerfeld. Photography. The Retrospective. The exhibition was curated by Eric Pfunder, image director at Chanel Fashion, and the publisher Gerhard Steidl, who selected the more than 300 photographs on display together with the late designer himself. As a tireless advocate of innovation, he would say: “In terms of style, I have many – or none.You can never stand still, not in life, not in fashion, not in photography.”