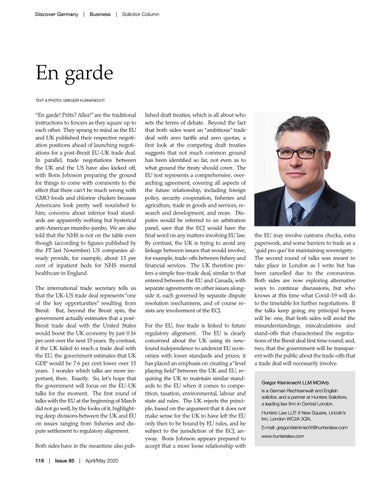 “En garde! Prêts? Allez!” are the traditional instructions to fencers as they square up to each other. They sprang to mind as the EU and UK published their respective negotiation positions ahead of launching negotiations for a post-Brexit EU-UK trade deal. In parallel, trade negotiations between the UK and the US have also kicked off, with Boris Johnson preparing the ground for things to come with comments to the effect that there can’t be much wrong with GMO foods and chlorine chicken because Americans look pretty well nourished to him; concerns about inferior food standards are apparently nothing but hysterical anti-American mumbo-jumbo. We are also told that the NHS is not on the table even though (according to figures published by the FT last November) US companies already provide, for example, about 13 per cent of inpatient beds for NHS mental healthcare in England. The international trade secretary tells us that the UK-US trade deal represents “one of the key opportunities” resulting from Brexit. But, beyond the Brexit spin, the government actually estimates that a postBrexit trade deal with the United States would boost the UK economy by just 0.16 per cent over the next 15 years. By contrast, if the UK failed to reach a trade deal with the EU, the government estimates that UK GDP would be 7.6 per cent lower over 15 years. I wonder which talks are more important, then. Exactly. So, let’s hope that the government will focus on the EU-UK talks for the moment. The first round of talks with the EU at the beginning of March did not go well, by the looks of it, highlighting deep divisions between the UK and EU on issues ranging from fisheries and dispute settlement to regulatory alignment. Both sides have in the meantime also pub118  |  Issue 85  |  April/May 2020

lished draft treaties, which is all about who sets the terms of debate. Beyond the fact that both sides want an “ambitious” trade deal with zero tariffs and zero quotas, a first look at the competing draft treaties suggests that not much common ground has been identified so far, not even as to what ground the treaty should cover. The EU text represents a comprehensive, overarching agreement, covering all aspects of the future relationship, including foreign policy, security cooperation, fisheries and agriculture, trade in goods and services, research and development, and more. Disputes would be referred to an arbitration panel, save that the ECJ would have the final word on any matters involving EU law. By contrast, the UK is trying to avoid any linkage between issues that would involve, for example, trade-offs between fishery and financial services. The UK therefore prefers a simple free-trade deal, similar to that entered between the EU and Canada, with separate agreements on other issues alongside it, each governed by separate dispute resolution mechanisms, and of course resists any involvement of the ECJ. For the EU, free trade is linked to future regulatory alignment. The EU is clearly concerned about the UK using its newfound independence to undercut EU economies with lower standards and prices; it has placed an emphasis on creating a “level playing field” between the UK and EU, requiring the UK to maintain similar standards to the EU when it comes to competition, taxation, environmental, labour and state aid rules. The UK rejects the principle, based on the argument that it does not make sense for the UK to have left the EU only then to be bound by EU rules, and be subject to the jurisdiction of the ECJ, anyway. Boris Johnson appears prepared to accept that a more loose relationship with

the EU may involve customs checks, extra paperwork, and some barriers to trade as a ‘quid pro quo’ for maintaining sovereignty. The second round of talks was meant to take place in London as I write but has been cancelled due to the coronavirus. Both sides are now exploring alternative ways to continue discussions, but who knows at this time what Covid-19 will do to the timetable for further negotiations. If the talks keep going, my principal hopes will be: one, that both sides will avoid the misunderstandings, miscalculations and stand-offs that characterised the negotiations of the Brexit deal first time round; and, two, that the government will be transparent with the public about the trade-offs that a trade deal will necessarily involve. Gregor Kleinknecht LLM MCIArb is a German Rechtsanwalt and English solicitor, and a partner at Hunters Solicitors, a leading law firm in Central London. Hunters Law LLP, 9 New Square, Lincoln’s Inn, London WC2A 3QN, E-mail: gregor.kleinknecht@hunterslaw.com www.hunterslaw.com