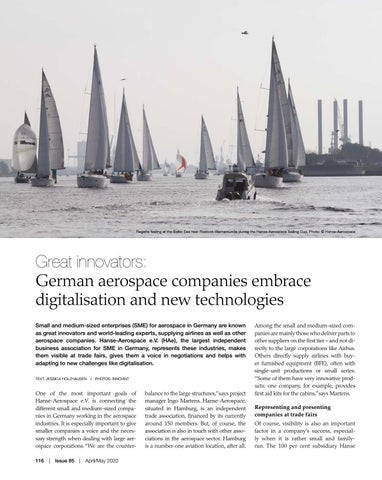 Great innovators: German aerospace companies embrace digitalisation and new technologies Small and medium-sized enterprises (SME) for aerospace in Germany are known as great innovators and world-leading experts, supplying airlines as well as other aerospace companies. Hanse-Aerospace e.V. (HAe), the largest independent business association for SME in Germany, represents these industries, makes them visible at trade fairs, gives them a voice in negotiations and helps with adapting to new challenges like digitalisation. TEXT: JESSICA HOLZHAUSEN I PHOTOS: INNOVINT

One of the most important goals of Hanse-Aerospace e.V. is connecting the different small and medium-sized companies in Germany working in the aerospace industries. It is especially important to give smaller companies a voice and the necessary strength when dealing with large aerospace corporations. “We are the counter116  |  Issue 85  |  April/May 2020

balance to the large structures,”says project manager Ingo Martens. Hanse-Aerospace, situated in Hamburg, is an independent trade association, financed by its currently around 150 members. But, of course, the association is also in touch with other associations in the aerospace sector. Hamburg is a number-one aviation location, after all.

Among the small and medium-sized companies are mainly those who deliver parts to other suppliers on the first tier – and not directly to the large corporations like Airbus. Others directly supply airlines with buyer furnished equipment (BFE), often with single-unit productions or small series. “Some of them have very innovative products: one company, for example, provides first aid kits for the cabins,” says Martens. Representing and presenting companies at trade fairs Of course, visibility is also an important factor in a company’s success, especially when it is rather small and familyrun. The 100 per cent subsidiary Hanse