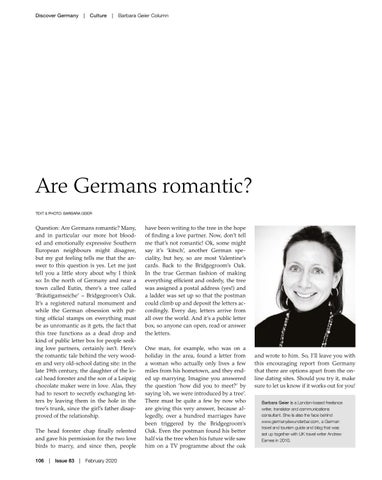 Question: Are Germans romantic? Many, and in particular our more hot blooded and emotionally expressive Southern European neighbours might disagree, but my gut feeling tells me that the answer to this question is yes. Let me just tell you a little story about why I think so: In the north of Germany and near a town called Eutin, there’s a tree called ‘Bräutigamseiche’ – Bridgegroom’s Oak. It’s a registered natural monument and while the German obsession with putting official stamps on everything must be as unromantic as it gets, the fact that this tree functions as a dead drop and kind of public letter box for people seeking love partners, certainly isn’t. Here’s the romantic tale behind the very wooden and very old-school dating site: in the late 19th century, the daughter of the local head forester and the son of a Leipzig chocolate maker were in love. Alas, they had to resort to secretly exchanging letters by leaving them in the hole in the tree’s trunk, since the girl’s father disapproved of the relationship. The head forester chap finally relented and gave his permission for the two love birds to marry, and since then, people 106  |  Issue 83  |  February 2020

have been writing to the tree in the hope of finding a love partner. Now, don’t tell me that’s not romantic! Ok, some might say it’s ‘kitsch’, another German speciality, but hey, so are most Valentine’s cards. Back to the Bridgegroom’s Oak. In the true German fashion of making everything efficient and orderly, the tree was assigned a postal address (yes!) and a ladder was set up so that the postman could climb up and deposit the letters accordingly. Every day, letters arrive from all over the world. And it’s a public letter box, so anyone can open, read or answer the letters. One man, for example, who was on a holiday in the area, found a letter from a woman who actually only lives a few miles from his hometown, and they ended up marrying. Imagine you answered the question ’how did you to meet?’ by saying ’oh, we were introduced by a tree’. There must be quite a few by now who are giving this very answer, because allegedly, over a hundred marriages have been triggered by the Bridgegroom’s Oak. Even the postman found his better half via the tree when his future wife saw him on a TV programme about the oak

and wrote to him. So, I’ll leave you with this encouraging report from Germany that there are options apart from the online dating sites. Should you try it, make sure to let us know if it works out for you! Barbara Geier is a London-based freelance writer, translator and communications consultant. She is also the face behind www.germanyiswunderbar.com, a German travel and tourism guide and blog that was set up together with UK travel writer Andrew Eames in 2010.