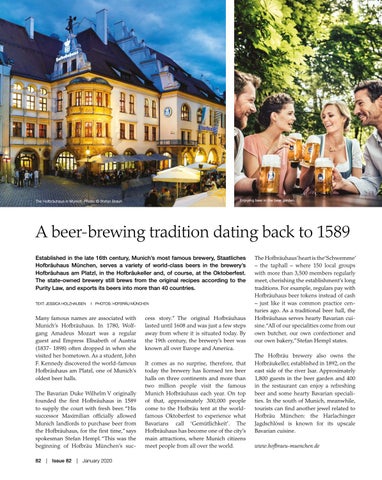 Enjoying beer in the beer garden.

A beer-brewing tradition dating back to 1589 Established in the late 16th century, Munich’s most famous brewery, Staatliches Hofbräuhaus München, serves a variety of world-class beers in the brewery’s Hofbräuhaus am Platzl, in the Hofbräukeller and, of course, at the Oktoberfest. The state-owned brewery still brews from the original recipes according to the Purity Law, and exports its beers into more than 40 countries. TEXT: JESSICA HOLZHAUSEN   I  PHOTOS: HOFBRÄU MÜNCHEN

Many famous names are associated with Munich’s Hofbräuhaus. In 1780, Wolfgang Amadeus Mozart was a regular guest and Empress Elisabeth of Austria (1837- 1898) often dropped in when she visited her hometown. As a student, John F. Kennedy discovered the world-famous Hofbräuhaus am Platzl, one of Munich’s oldest beer halls. The Bavarian Duke Wilhelm V originally founded the first Hofbräuhaus in 1589 to supply the court with fresh beer. “His successor Maximilian officially allowed Munich landlords to purchase beer from the Hofbräuhaus, for the first time,” says spokesman Stefan Hempl. “This was the beginning of Hofbräu München’s suc82  |  Issue 82  |  January 2020

cess story.” The original Hofbräuhaus lasted until 1608 and was just a few steps away from where it is situated today. By the 19th century, the brewery’s beer was known all over Europe and America. It comes as no surprise, therefore, that today the brewery has licensed ten beer halls on three continents and more than two million people visit the famous Munich Hofbräuhaus each year. On top of that, approximately 300,000 people come to the Hofbräu tent at the worldfamous Oktoberfest to experience what Bavarians call ‘Gemütlichkeit’. The Hofbräuhaus has become one of the city’s main attractions, where Munich citizens meet people from all over the world.

The Hofbräuhaus’heart is the‘Schwemme’ – the taphall – where 150 local groups with more than 3,500 members regularly meet, cherishing the establishment’s long traditions. For example, regulars pay with Hofbräuhaus beer tokens instead of cash – just like it was common practice centuries ago. As a traditional beer hall, the Hofbräuhaus serves hearty Bavarian cuisine.“All of our specialities come from our own butcher, our own confectioner and our own bakery,” Stefan Hempl states. The Hofbräu brewery also owns the Hofbräukeller, established in 1892, on the east side of the river Isar. Approximately 1,800 guests in the beer garden and 400 in the restaurant can enjoy a refreshing beer and some hearty Bavarian specialities. In the south of Munich, meanwhile, tourists can find another jewel related to Hofbräu München: the Harlachinger Jagdschlössl is known for its upscale Bavarian cuisine. www.hofbraeu-muenchen.de

Our first issue of 2020 boasts many inspiring reads: top-ten cultural experiences in Austria, interviews with director Florian Froschmayer a...

Our first issue of 2020 boasts many inspiring reads: top-ten cultural experiences in Austria, interviews with director Florian Froschmayer a...