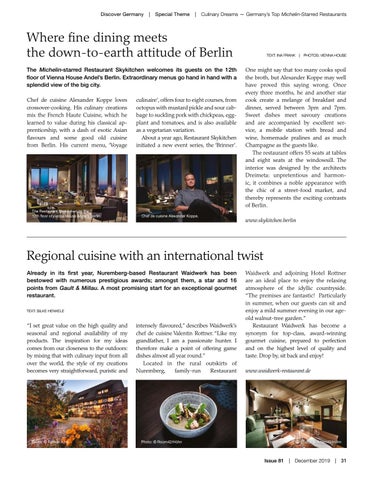 Where fine dining meets the down-to-earth attitude of Berlin The Michelin-starred Restaurant Skykitchen welcomes its guests on the 12th floor of Vienna House Andel’s Berlin. Extraordinary menus go hand in hand with a splendid view of the big city. Chef de cuisine Alexander Koppe loves crossover-cooking. His culinary creations mix the French Haute Cuisine, which he learned to value during his classical apprenticeship, with a dash of exotic Asian flavours and some good old cuisine from Berlin. His current menu, ‘Voyage

The Restaurant Skykitchen on the 12th floor of Vienna House Andel’s Berlin.

culinaire’, offers four to eight courses, from octopus with mustard pickle and sour cabbage to suckling pork with chickpeas, eggplant and tomatoes, and is also available as a vegetarian variation. About a year ago, Restaurant Skykitchen initiated a new event series, the ‘Brinner’.

One might say that too many cooks spoil the broth, but Alexander Koppe may well have proved this saying wrong. Once every three months, he and another star cook create a melange of breakfast and dinner, served between 3pm and 7pm. Sweet dishes meet savoury creations and are accompanied by excellent service, a mobile station with bread and wine, homemade pralines and as much Champagne as the guests like. The restaurant offers 55 seats at tables and eight seats at the windowsill. The interior was designed by the architects Dreimeta: unpretentious and harmonic, it combines a noble appearance with the chic of a street-food market, and thereby represents the exciting contrasts of Berlin. www.skykitchen.berlin

Regional cuisine with an international twist Already in its first year, Nuremberg-based Restaurant Waidwerk has been bestowed with numerous prestigious awards; amongst them, a star and 16 points from Gault &amp; Millau. A most promising start for an exceptional gourmet restaurant. TEXT: SILKE HENKELE

“I set great value on the high quality and seasonal and regional availability of my products. The inspiration for my ideas comes from our closeness to the outdoors: by mixing that with culinary input from all over the world, the style of my creations becomes very straightforward, puristic and

intensely flavoured,” describes Waidwerk’s chef de cuisine Valentin Rottner. “Like my grandfather, I am a passionate hunter. I therefore make a point of offering game dishes almost all year round.” Located in the rural outskirts of Nuremberg, family-run Restaurant

Waidwerk and adjoining Hotel Rottner are an ideal place to enjoy the relaxing atmosphere of the idyllic countryside. “The premises are fantastic! Particularly in summer, when our guests can sit and enjoy a mild summer evening in our ageold walnut-tree garden.” Restaurant Waidwerk has become a synonym for top-class, award-winning gourmet cuisine, prepared to perfection and on the highest level of quality and taste. Drop by, sit back and enjoy! www.waidwerk-restaurant.de