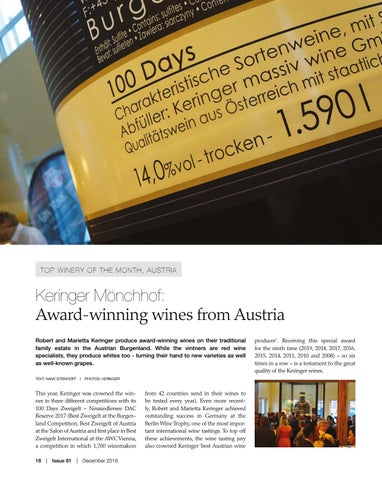 Keringer Mönchhof: Award-winning wines from Austria Robert and Marietta Keringer produce award-winning wines on their traditional family estate in the Austrian Burgenland. While the vintners are red wine specialists, they produce whites too - turning their hand to new varieties as well as well-known grapes. TEXT: NANE STEINHOFF  I  PHOTOS: KERINGER

This year, Keringer was crowned the winner in three different competitions with its 100 Days Zweigelt – Neusiedlersee DAC Reserve 2017 (Best Zweigelt at the Burgenland Competition, Best Zweigelt of Austria at the Salon of Austria and first place in Best Zweigelt International at the AWC Vienna, a competition in which 1,700 winemakers 18  |  Issue 81  |  December 2019

from 42 countries send in their wines to be tested every year). Even more recently, Robert and Marietta Keringer achieved outstanding success in Germany at the Berlin Wine Trophy, one of the most important international wine tastings. To top off these achievements, the wine tasting jury also crowned Keringer ‘best Austrian wine