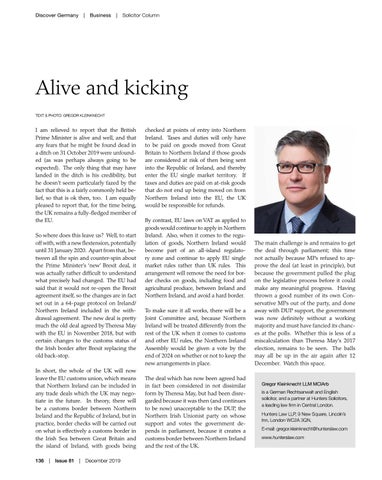 I am relieved to report that the British Prime Minister is alive and well, and that any fears that he might be found dead in a ditch on 31 October 2019 were unfounded (as was perhaps always going to be expected). The only thing that may have landed in the ditch is his credibility, but he doesn’t seem particularly fazed by the fact that this is a fairly commonly held belief, so that is ok then, too. I am equally pleased to report that, for the time being, the UK remains a fully-fledged member of the EU. So where does this leave us? Well, to start off with, with a new flextension, potentially until 31 January 2020. Apart from that, between all the spin and counter-spin about the Prime Minister’s ‘new’ Brexit deal, it was actually rather difficult to understand what precisely had changed. The EU had said that it would not re-open the Brexit agreement itself, so the changes are in fact set out in a 64-page protocol on Ireland/ Northern Ireland included in the withdrawal agreement. The new deal is pretty much the old deal agreed by Theresa May with the EU in November 2018, but with certain changes to the customs status of the Irish border after Brexit replacing the old back-stop. In short, the whole of the UK will now leave the EU customs union, which means that Northern Ireland can be included in any trade deals which the UK may negotiate in the future. In theory, there will be a customs border between Northern Ireland and the Republic of Ireland, but in practice, border checks will be carried out on what is effectively a customs border in the Irish Sea between Great Britain and the island of Ireland, with goods being 136  |  Issue 81  |  December 2019

checked at points of entry into Northern Ireland. Taxes and duties will only have to be paid on goods moved from Great Britain to Northern Ireland if those goods are considered at risk of then being sent into the Republic of Ireland, and thereby enter the EU single market territory. If taxes and duties are paid on at-risk goods that do not end up being moved on from Northern Ireland into the EU, the UK would be responsible for refunds. By contrast, EU laws on VAT as applied to goods would continue to apply in Northern Ireland. Also, when it comes to the regulation of goods, Northern Ireland would become part of an all-island regulatory zone and continue to apply EU single market rules rather than UK rules. This arrangement will remove the need for border checks on goods, including food and agricultural produce, between Ireland and Northern Ireland, and avoid a hard border. To make sure it all works, there will be a Joint Committee and, because Northern Ireland will be treated differently from the rest of the UK when it comes to customs and other EU rules, the Northern Ireland Assembly would be given a vote by the end of 2024 on whether or not to keep the new arrangements in place. The deal which has now been agreed had in fact been considered in not dissimilar form by Theresa May, but had been disregarded because it was then (and continues to be now) unacceptable to the DUP, the Northern Irish Unionist party on whose support and votes the government depends in parliament, because it creates a customs border between Northern Ireland and the rest of the UK.

The main challenge is and remains to get the deal through parliament; this time not actually because MPs refused to approve the deal (at least in principle), but because the government pulled the plug on the legislative process before it could make any meaningful progress. Having thrown a good number of its own Conservative MPs out of the party, and done away with DUP support, the government was now definitely without a working majority and must have fancied its chances at the polls. Whether this is less of a miscalculation than Theresa May’s 2017 election, remains to be seen. The balls may all be up in the air again after 12 December. Watch this space. Gregor Kleinknecht LLM MCIArb is a German Rechtsanwalt and English solicitor, and a partner at Hunters Solicitors, a leading law firm in Central London. Hunters Law LLP, 9 New Square, Lincoln’s Inn, London WC2A 3QN, E-mail: gregor.kleinknecht@hunterslaw.com www.hunterslaw.com