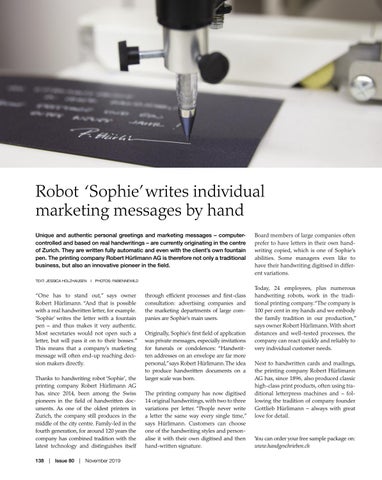 Robot ‘Sophie’ writes individual marketing messages by hand Unique and authentic personal greetings and marketing messages – computercontrolled and based on real handwritings – are currently originating in the centre of Zurich. They are written fully automatic and even with the client’s own fountain pen. The printing company Robert Hürlimann AG is therefore not only a traditional business, but also an innovative pioneer in the field.

Board members of large companies often prefer to have letters in their own handwriting copied, which is one of Sophie’s abilities. Some managers even like to have their handwriting digitised in different variations.

“One has to stand out,” says owner Robert Hürlimann. “And that is possible with a real handwritten letter, for example. ‘Sophie’ writes the letter with a fountain pen – and thus makes it very authentic. Most secretaries would not open such a letter, but will pass it on to their bosses.” This means that a company’s marketing message will often end-up reaching decision makers directly. Thanks to handwriting robot ‘Sophie’, the printing company Robert Hürlimann AG has, since 2014, been among the Swiss pioneers in the field of handwritten documents. As one of the oldest printers in Zurich, the company still produces in the middle of the city centre. Family-led in the fourth generation, for around 120 years the company has combined tradition with the latest technology and distinguishes itself 138  |  Issue 80  |  November 2019

through efficient processes and first-class consultation: advertising companies and the marketing departments of large companies are Sophie’s main users. Originally, Sophie’s first field of application was private messages, especially invitations for funerals or condolences: “Handwritten addresses on an envelope are far more personal,” says Robert Hürlimann. The idea to produce handwritten documents on a larger scale was born. The printing company has now digitised 14 original handwritings, with two to three variations per letter. “People never write a letter the same way every single time,” says Hürlimann. Customers can choose one of the handwriting styles and personalise it with their own digitised and then hand-written signature.

Today, 24 employees, plus numerous handwriting robots, work in the traditional printing company.“The company is 100 per cent in my hands and we embody the family tradition in our production,” says owner Robert Hürlimann. With short distances and well-tested processes, the company can react quickly and reliably to very individual customer needs. Next to handwritten cards and mailings, the printing company Robert Hürlimann AG has, since 1896, also produced classic high-class print products, often using traditional letterpress machines and – following the tradition of company founder Gottlieb Hürlimann – always with great love for detail.

You can order your free sample package on: www.handgeschrieben.ch

Discover Germany, Austria & Switzerland’s November issue gives some tips on how to embrace winter to the fullest. The magazine therefore looks at men’s fashion staples for the cold season, the top-ten things to do in the DACH region this winter, must-visit Christmas markets and much more. Other topics covered are top hotels and interviews with the Austrian actor Michael Ostrowski and German singer Lena Meyer-Landrut, amongst other things.