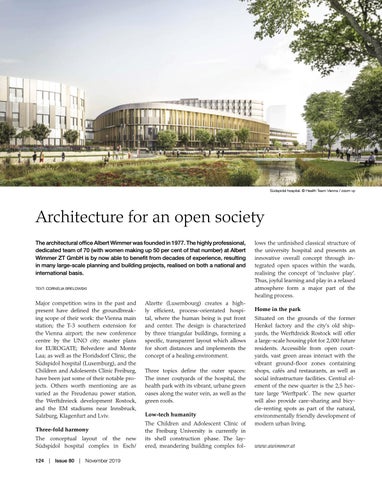 Architecture for an open society The architectural office Albert Wimmer was founded in 1977. The highly professional, dedicated team of 70 (with women making up 50 per cent of that number) at Albert Wimmer ZT GmbH is by now able to benefit from decades of experience, resulting in many large-scale planning and building projects, realised on both a national and international basis. TEXT: CORNELIA BRELOWSKI

Major competition wins in the past and present have defined the groundbreaking scope of their work: the Vienna main station; the T-3 southern extension for the Vienna airport; the new conference centre by the UNO city; master plans for EUROGATE; Belvedere and Monte Laa; as well as the Floridsdorf Clinic, the Südspidol hospital (Luxemburg), and the Children and Adolesents Clinic Freiburg, have been just some of their notable projects. Others worth mentioning are as varied as the Freudenau power station, the Werftdreieck development Rostock, and the EM stadiums near Innsbruck, Salzburg, Klagenfurt and Lviv. Three-fold harmony The conceptual layout of the new Südspidol hospital complex in Esch/ 124  |  Issue 80  |  November 2019

Alzette (Luxembourg) creates a highly efficient, process-orientated hospital, where the human being is put front and center. The design is characterized by three triangular buildings, forming a specific, transparent layout which allows for short distances and implements the concept of a healing environment. Three topics define the outer spaces: The inner coutyards of the hospital, the health park with its vibrant, urbane green oases along the water vein, as well as the green roofs. Low-tech humanity The Children and Adolescent Clinic of the Freiburg University is currently in its shell construction phase. The layered, meandering building complex fol-

lows the unfinished classical structure of the university hospital and presents an innovative overall concept through integrated open spaces within the wards, realising the concept of ‘inclusive play’. Thus, joyful learning and play in a relaxed atmosphere form a major part of the healing process. Home in the park Situated on the grounds of the former Henkel factory and the city’s old shipyards, the Werftdreick Rostock will offer a large-scale housing plot for 2,000 future residents. Accessible from open courtyards, vast green areas interact with the vibrant ground-floor zones containing shops, cafés and restaurants, as well as social infrastructure facilities. Central element of the new quarter is the 2,5 hectare large ‘Werftpark’. The new quarter will also provide care-sharing and bicycle-renting spots as part of the natural, environmentally friendly development of modern urban living.

Discover Germany, Austria & Switzerland’s November issue gives some tips on how to embrace winter to the fullest. The magazine therefore loo...

Discover Germany, Austria & Switzerland’s November issue gives some tips on how to embrace winter to the fullest. The magazine therefore loo...