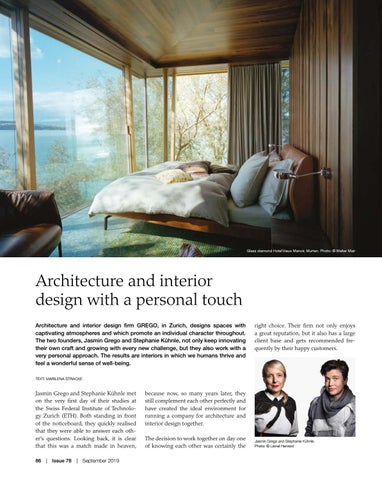 Architecture and interior design with a personal touch Architecture and interior design firm GREGO, in Zurich, designs spaces with captivating atmospheres and which promote an individual character throughout. The two founders, Jasmin Grego and Stephanie Kühnle, not only keep innovating their own craft and growing with every new challenge, but they also work with a very personal approach. The results are interiors in which we humans thrive and feel a wonderful sense of well-being.

right choice. Their firm not only enjoys a great reputation, but it also has a large client base and gets recommended frequently by their happy customers.

Jasmin Grego and Stephanie Kühnle met on the very first day of their studies at the Swiss Federal Institute of Technology Zurich (ETH). Both standing in front of the noticeboard, they quickly realised that they were able to answer each other’s questions. Looking back, it is clear that this was a match made in heaven, 86  |  Issue 78  |  September 2019

because now, so many years later, they still complement each other perfectly and have created the ideal environment for running a company for architecture and interior design together. The decision to work together on day one of knowing each other was certainly the