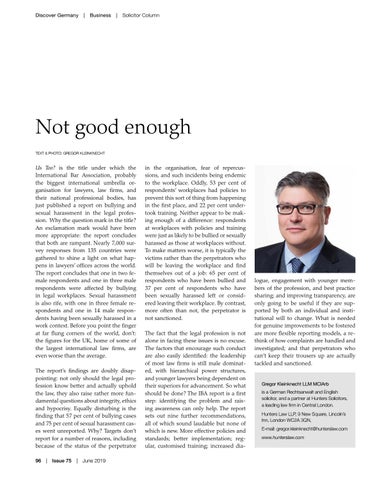 Us Too? is the title under which the International Bar Association, probably the biggest international umbrella organisation for lawyers, law firms, and their national professional bodies, has just published a report on bullying and sexual harassment in the legal profession. Why the question mark in the title? An exclamation mark would have been more appropriate: the report concludes that both are rampant. Nearly 7,000 survey responses from 135 countries were gathered to shine a light on what happens in lawyers’ offices across the world. The report concludes that one in two female respondents and one in three male respondents were affected by bullying in legal workplaces. Sexual harassment is also rife, with one in three female respondents and one in 14 male respondents having been sexually harassed in a work context. Before you point the finger at far flung corners of the world, don’t: the figures for the UK, home of some of the largest international law firms, are even worse than the average. The report’s findings are doubly disappointing: not only should the legal profession know better and actually uphold the law, they also raise rather more fundamental questions about integrity, ethics and hypocrisy. Equally disturbing is the finding that 57 per cent of bullying cases and 75 per cent of sexual harassment cases went unreported. Why? Targets don’t report for a number of reasons, including because of the status of the perpetrator 96  |  Issue 75  |  June 2019

in the organisation, fear of repercussions, and such incidents being endemic to the workplace. Oddly, 53 per cent of respondents’ workplaces had policies to prevent this sort of thing from happening in the first place, and 22 per cent undertook training. Neither appear to be making enough of a difference: respondents at workplaces with policies and training were just as likely to be bullied or sexually harassed as those at workplaces without. To make matters worse, it is typically the victims rather than the perpetrators who will be leaving the workplace and find themselves out of a job: 65 per cent of respondents who have been bullied and 37 per cent of respondents who have been sexually harassed left or considered leaving their workplace. By contrast, more often than not, the perpetrator is not sanctioned. The fact that the legal profession is not alone in facing these issues is no excuse. The factors that encourage such conduct are also easily identified: the leadership of most law firms is still male dominated, with hierarchical power structures, and younger lawyers being dependent on their superiors for advancement. So what should be done? The IBA report is a first step: identifying the problem and raising awareness can only help. The report sets out nine further recommendations, all of which sound laudable but none of which is new. More effective policies and standards; better implementation; regular, customised training; increased dia-

logue, engagement with younger members of the profession, and best practice sharing; and improving transparency, are only going to be useful if they are supported by both an individual and institutional will to change. What is needed for genuine improvements to be fostered are more flexible reporting models, a rethink of how complaints are handled and investigated; and that perpetrators who can’t keep their trousers up are actually tackled and sanctioned. Gregor Kleinknecht LLM MCIArb is a German Rechtsanwalt and English solicitor, and a partner at Hunters Solicitors, a leading law firm in Central London. Hunters Law LLP, 9 New Square, Lincoln’s Inn, London WC2A 3QN, E-mail: gregor.kleinknecht@hunterslaw.com www.hunterslaw.com