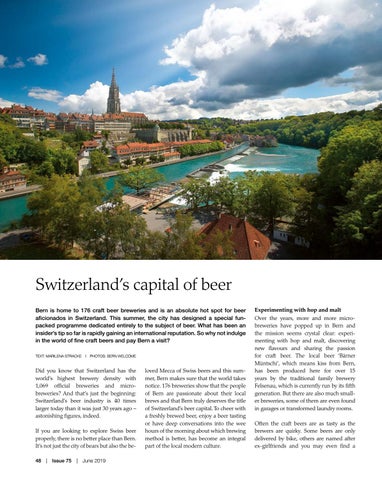 Switzerland’s capital of beer Bern is home to 176 craft beer breweries and is an absolute hot spot for beer aficionados in Switzerland. This summer, the city has designed a special funpacked programme dedicated entirely to the subject of beer. What has been an insider’s tip so far is rapidly gaining an international reputation. So why not indulge in the world of fine craft beers and pay Bern a visit? TEXT: MARILENA STRACKE  I  PHOTOS: BERN WELCOME

Did you know that Switzerland has the world’s highest brewery density with 1,069 official breweries and microbreweries? And that’s just the beginning: Switzerland’s beer industry is 40 times larger today than it was just 30 years ago – astonishing figures, indeed. If you are looking to explore Swiss beer properly, there is no better place than Bern. It’s not just the city of bears but also the be48  |  Issue 75  |  June 2019

loved Mecca of Swiss beers and this summer, Bern makes sure that the world takes notice. 176 breweries show that the people of Bern are passionate about their local brews and that Bern truly deserves the title of Switzerland’s beer capital. To cheer with a freshly brewed beer, enjoy a beer tasting or have deep conversations into the wee hours of the morning about which brewing method is better, has become an integral part of the local modern culture.

Experimenting with hop and malt Over the years, more and more microbreweries have popped up in Bern and the mission seems crystal clear: experimenting with hop and malt, discovering new flavours and sharing the passion for craft beer. The local beer ‘Bärner Müntschi’, which means kiss from Bern, has been produced here for over 15 years by the traditional family brewery Felsenau, which is currently run by its fifth generation. But there are also much smaller breweries, some of them are even found in garages or transformed laundry rooms. Often the craft beers are as tasty as the brewers are quirky. Some beers are only delivered by bike, others are named after ex-girlfriends and you may even find a