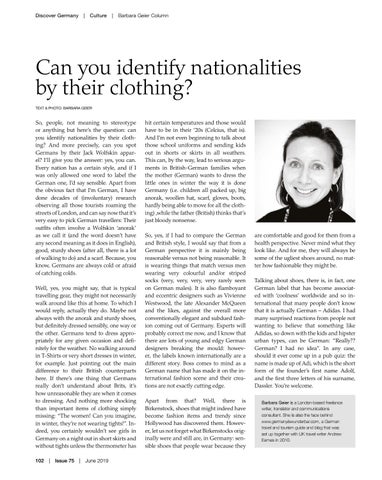 Can you identify nationalities by their clothing? TEXT & PHOTO: BARBARA GEIER

So, people, not meaning to stereotype or anything but here’s the question: can you identify nationalities by their clothing? And more precisely, can you spot Germans by their Jack Wolfskin apparel? I’ll give you the answer: yes, you can. Every nation has a certain style, and if I was only allowed one word to label the German one, I’d say sensible. Apart from the obvious fact that I’m German, I have done decades of (involuntary) research observing all those tourists roaming the streets of London, and can say now that it’s very easy to pick German travellers: Their outfits often involve a Wolfskin ‘anorak’ as we call it (and the word doesn’t have any second meaning as it does in English), good, sturdy shoes (after all, there is a lot of walking to do) and a scarf. Because, you know, Germans are always cold or afraid of catching colds. Well, yes, you might say, that is typical travelling gear, they might not necessarily walk around like this at home. To which I would reply, actually they do. Maybe not always with the anorak and sturdy shoes, but definitely dressed sensibly, one way or the other. Germans tend to dress appropriately for any given occasion and definitely for the weather. No walking around in T-Shirts or very short dresses in winter, for example. Just pointing out the main difference to their British counterparts here. If there’s one thing that Germans really don’t understand about Brits, it’s how unreasonable they are when it comes to dressing. And nothing more shocking than important items of clothing simply missing: “The women! Can you imagine, in winter, they’re not wearing tights!”. Indeed, you certainly wouldn’t see girls in Germany on a night out in short skirts and without tights unless the thermometer has 102  |  Issue 75  |  June 2019

hit certain temperatures and those would have to be in their ‘20s (Celcius, that is). And I’m not even beginning to talk about those school uniforms and sending kids out in shorts or skirts in all weathers. This can, by the way, lead to serious arguments in British-German families when the mother (German) wants to dress the little ones in winter the way it is done Germany (i.e. children all packed up, big anorak, woollen hat, scarf, gloves, boots, hardly being able to move for all the clothing) ,while the father (British) thinks that’s just bloody nonsense. So, yes, if I had to compare the German and British style, I would say that from a German perspective it is mainly being reasonable versus not being reasonable. It is wearing things that match versus men wearing very colourful and/or striped socks (very, very, very, very rarely seen on German males). It is also flamboyant and eccentric designers such as Vivienne Westwood, the late Alexander McQueen and the likes, against the overall more conventionally elegant and subdued fashion coming out of Germany. Experts will probably correct me now, and I know that there are lots of young and edgy German designers breaking the mould: however, the labels known internationally are a different story. Boss comes to mind as a German name that has made it on the international fashion scene and their creations are not exactly cutting edge. Apart from that? Well, there is Birkenstock, shoes that might indeed have become fashion items and trendy since Hollywood has discovered them. However, let us not forget what Birkenstocks originally were and still are, in Germany: sensible shoes that people wear because they

are comfortable and good for them from a health perspective. Never mind what they look like. And for me, they will always be some of the ugliest shoes around, no matter how fashionable they might be. Talking about shoes, there is, in fact, one German label that has become associated with ‘coolness’ worldwide and so international that many people don’t know that it is actually German – Adidas. I had many surprised reactions from people not wanting to believe that something like Adidas, so down with the kids and hipster urban types, can be German: “Really?? German? I had no idea”. In any case, should it ever come up in a pub quiz: the name is made up of Adi, which is the short form of the founder’s first name Adolf, and the first three letters of his surname, Dassler. You’re welcome. Barbara Geier is a London-based freelance writer, translator and communications consultant. She is also the face behind www.germanyiswunderbar.com, a German travel and tourism guide and blog that was set up together with UK travel writer Andrew Eames in 2010.