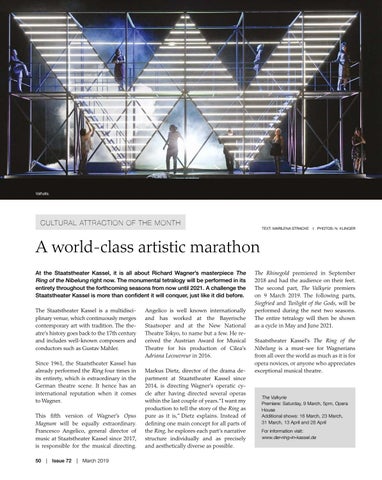 Angelico is well known internationally and has worked at the Bayerische Staatsoper and at the New National Theatre Tokyo, to name but a few. He received the Austrian Award for Musical Theatre for his production of Cilea’s Adriana Lecouvreur in 2016. Markus Dietz, director of the drama department at Staatstheater Kassel since 2014, is directing Wagner’s operatic cycle after having directed several operas within the last couple of years.“I want my production to tell the story of the Ring as pure as it is,” Dietz explains. Instead of defining one main concept for all parts of the Ring, he explores each part’s narrative structure individually and as precisely and aesthetically diverse as possible.

The Rhinegold premiered in September 2018 and had the audience on their feet. The second part, The Valkyrie premiers on 9 March 2019. The following parts, Siegfried and Twilight of the Gods, will be performed during the next two seasons. The entire tetralogy will then be shown as a cycle in May and June 2021. Staatstheater Kassel’s The Ring of the Nibelung is a must-see for Wagnerians from all over the world as much as it is for opera novices, or anyone who appreciates exceptional musical theatre.