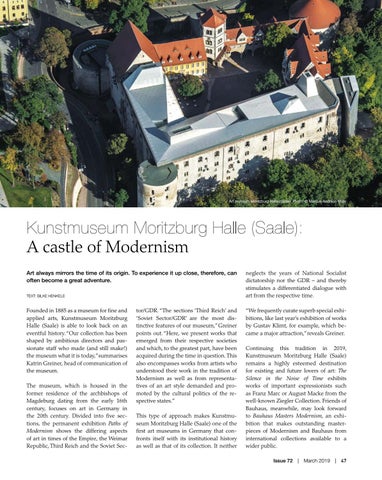 Kunstmuseum Moritzburg Halle (Saale): A castle of Modernism Art always mirrors the time of its origin. To experience it up close, therefore, can often become a great adventure. TEXT: SILKE HENKELE

Founded in 1885 as a museum for fine and applied arts, Kunstmuseum Moritzburg Halle (Saale) is able to look back on an eventful history. “Our collection has been shaped by ambitious directors and passionate staff who made (and still make!) the museum what it is today,” summarises Katrin Greiner, head of communication of the museum. The museum, which is housed in the former residence of the archbishops of Magdeburg dating from the early 16th century, focuses on art in Germany in the 20th century. Divided into five sections, the permanent exhibition Paths of Modernism shows the differing aspects of art in times of the Empire, the Weimar Republic, Third Reich and the Soviet Sec-

tor/GDR. “The sections ‘Third Reich’ and ‘Soviet Sector/GDR’ are the most distinctive features of our museum,” Greiner points out. “Here, we present works that emerged from their respective societies and which, to the greatest part, have been acquired during the time in question. This also encompasses works from artists who understood their work in the tradition of Modernism as well as from representatives of an art style demanded and promoted by the cultural politics of the respective states.” This type of approach makes Kunstmuseum Moritzburg Halle (Saale) one of the first art museums in Germany that confronts itself with its institutional history as well as that of its collection. It neither

neglects the years of National Socialist dictatorship nor the GDR – and thereby stimulates a differentiated dialogue with art from the respective time. “We frequently curate superb special exhibitions, like last year’s exhibition of works by Gustav Klimt, for example, which became a major attraction,” reveals Greiner. Continuing this tradition in 2019, Kunstmuseum Moritzburg Halle (Saale) remains a highly esteemed destination for existing and future lovers of art: The Silence in the Noise of Time exhibits works of important expressionists such as Franz Marc or August Macke from the well-known Ziegler Collection. Friends of Bauhaus, meanwhile, may look forward to Bauhaus Masters Modernism, an exhibition that makes outstanding masterpieces of Modernism and Bauhaus from international collections available to a wider public. Issue 72  |  March 2019  |  47