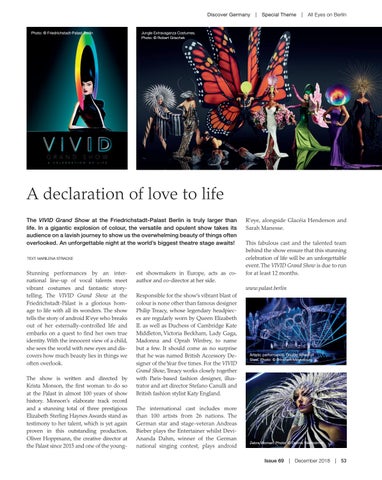 A declaration of love to life The VIVID Grand Show at the Friedrichstadt-Palast Berlin is truly larger than life. In a gigantic explosion of colour, the versatile and opulent show takes its audience on a lavish journey to show us the overwhelming beauty of things often overlooked. An unforgettable night at the world’s biggest theatre stage awaits! TEXT: MARILENA STRACKE

Stunning performances by an international line-up of vocal talents meet vibrant costumes and fantastic storytelling. The VIVID Grand Show at the Friedrichstadt-Palast is a glorious homage to life with all its wonders. The show tells the story of android R’eye who breaks out of her externally-controlled life and embarks on a quest to find her own true identity. With the innocent view of a child, she sees the world with new eyes and discovers how much beauty lies in things we often overlook. The show is written and directed by Krista Monson, the first woman to do so at the Palast in almost 100 years of show history. Monson’s elaborate track record and a stunning total of three prestigious Elizabeth Sterling Haynes Awards stand as testimony to her talent, which is yet again proven in this outstanding production. Oliver Hoppmann, the creative director at the Palast since 2015 and one of the young-

est showmakers in Europe, acts as coauthor and co-director at her side.

R’eye, alongside Glacéia Henderson and Sarah Manesse. This fabulous cast and the talented team behind the show ensure that this stunning celebration of life will be an unforgettable event. The VIVID Grand Show is due to run for at least 12 months. www.palast.berlin

Responsible for the show’s vibrant blast of colour is none other than famous designer Philip Treacy, whose legendary headpieces are regularly worn by Queen Elizabeth II. as well as Duchess of Cambridge Kate Middleton, Victoria Beckham, Lady Gaga, Madonna and Oprah Winfrey, to name but a few. It should come as no surprise that he was named British Accessory Designer of the Year five times. For the VIVID Grand Show, Treacy works closely together with Paris-based fashion designer, illustrator and art director Stefano Canulli and British fashion stylist Katy England. The international cast includes more than 100 artists from 26 nations. The German star and stage-veteran Andreas Bieber plays the Entertainer whilst DeviAnanda Dahm, winner of the German national singing contest, plays android