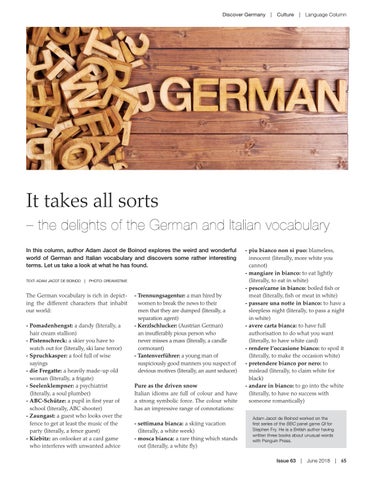 The German vocabulary is rich in depicting the different characters that inhabit our world: - Pomadenhengst: a dandy (literally, a hair cream stallion) - Pistenschreck: a skier you have to watch out for (literally, ski lane terror) - Spruchkasper: a fool full of wise sayings - die Fregatte: a heavily made-up old woman (literally, a frigate) - Seelenklempner: a psychiatrist (literally, a soul plumber) - ABC-Schütze: a pupil in first year of school (literally, ABC shooter) - Zaungast: a guest who looks over the fence to get at least the music of the party (literally, a fence guest) - Kiebitz: an onlooker at a card game who interferes with unwanted advice

- Trennungsagentur: a man hired by women to break the news to their men that they are dumped (literally, a separation agent) - Kerzlschlucker: (Austrian German) an insufferably pious person who never misses a mass (literally, a candle cormorant) - Tantenverführer: a young man of suspiciously good manners you suspect of devious motives (literally, an aunt seducer) Pure as the driven snow Italian idioms are full of colour and have a strong symbolic force. The colour white has an impressive range of connotations: - settimana bianca: a skiing vacation (literally, a white week) - mosca bianca: a rare thing which stands out (literally, a white fly)