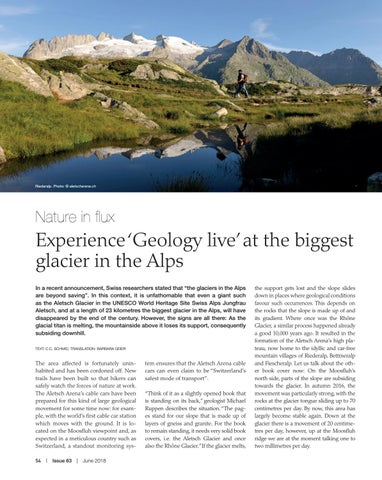 Experience ‘Geology live’ at the biggest glacier in the Alps In a recent announcement, Swiss researchers stated that “the glaciers in the Alps are beyond saving”. In this context, it is unfathomable that even a giant such as the Aletsch Glacier in the UNESCO World Heritage Site Swiss Alps Jungfrau Aletsch, and at a length of 23 kilometres the biggest glacier in the Alps, will have disappeared by the end of the century. However, the signs are all there: As the glacial titan is melting, the mountainside above it loses its support, consequently subsiding downhill. TEXT: C.C. SCHMID, TRANSLATION: BARBARA GEIER

The area affected is fortunately uninhabited and has been cordoned off. New trails have been built so that hikers can safely watch the forces of nature at work. The Aletsch Arena’s cable cars have been prepared for this kind of large geological movement for some time now: for example, with the world’s first cable car station which moves with the ground. It is located on the Moosfluh viewpoint and, as expected in a meticulous country such as Switzerland, a standout monitoring sys54  |  Issue 63  |  June 2018

tem ensures that the Aletsch Arena cable cars can even claim to be “Switzerland’s safest mode of transport”. “Think of it as a slightly opened book that is standing on its back,” geologist Michael Ruppen describes the situation. “The pages stand for our slope that is made up of layers of gneiss and granite. For the book to remain standing, it needs very solid book covers, i.e. the Aletsch Glacier and once also the Rhône Glacier.”If the glacier melts,

the support gets lost and the slope slides down in places where geological conditions favour such occurrences. This depends on the rocks that the slope is made up of and its gradient. Where once was the Rhône Glacier, a similar process happened already a good 10,000 years ago. It resulted in the formation of the Aletsch Arena’s high plateau, now home to the idyllic and car-free mountain villages of Riederalp, Bettmeralp and Fiescheralp. Let us talk about the other book cover now: On the Moosfluh’s north side, parts of the slope are subsiding towards the glacier. In autumn 2016, the movement was particularly strong, with the rocks at the glacier tongue sliding up to 70 centimetres per day. By now, this area has largely become stable again. Down at the glacier there is a movement of 20 centimetres per day, however, up at the Moosfluh ridge we are at the moment talking one to two millimetres per day.