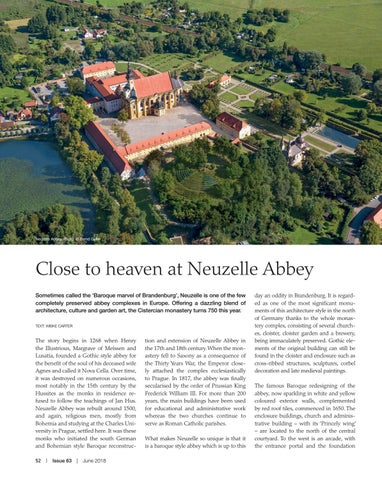 Close to heaven at Neuzelle Abbey Sometimes called the ‘Baroque marvel of Brandenburg’, Neuzelle is one of the few completely preserved abbey complexes in Europe. Offering a dazzling blend of architecture, culture and garden art, the Cistercian monastery turns 750 this year. TEXT: WIBKE CARTER

The story begins in 1268 when Henry the Illustrious, Margrave of Meissen and Lusatia, founded a Gothic style abbey for the benefit of the soul of his deceased wife Agnes and called it Nova Cella. Over time, it was destroyed on numerous occasions, most notably in the 15th century by the Hussites as the monks in residence refused to follow the teachings of Jan Hus. Neuzelle Abbey was rebuilt around 1500, and again, religious men, mostly from Bohemia and studying at the Charles University in Prague, settled here. It was these monks who initiated the south German and Bohemian style Baroque reconstruc52  |  Issue 63  |  June 2018

tion and extension of Neuzelle Abbey in the 17th and 18th century. When the monastery fell to Saxony as a consequence of the Thirty Years War, the Emperor closely attached the complex ecclesiastically to Prague. In 1817, the abbey was finally secularised by the order of Prussian King Frederick William III. For more than 200 years, the main buildings have been used for educational and administrative work whereas the two churches continue to serve as Roman Catholic parishes. What makes Neuzelle so unique is that it is a baroque style abbey which is up to this

day an oddity in Brandenburg. It is regarded as one of the most significant monuments of this architecture style in the north of Germany thanks to the whole monastery complex, consisting of several churches, cloister, cloister garden and a brewery, being immaculately preserved. Gothic elements of the original building can still be found in the cloister and enclosure such as cross-ribbed structures, sculptures, corbel decoration and late medieval paintings. The famous Baroque redesigning of the abbey, now sparkling in white and yellow coloured exterior walls, complemented by red roof tiles, commenced in 1650. The enclosure buildings, church and administrative building – with its ‘Princely wing’ – are located to the north of the central courtyard. To the west is an arcade, with the entrance portal and the foundation