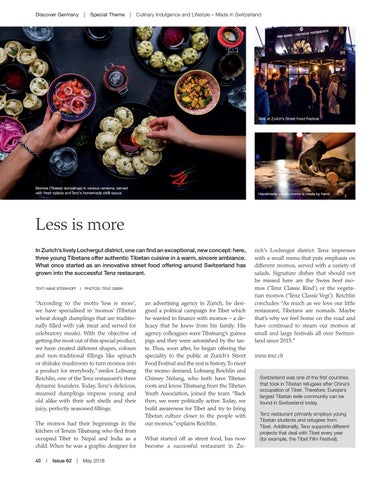 Handmade – each momo is made by hand.

Less is more In Zurich’s lively Lochergut district, one can find an exceptional, new concept: here, three young Tibetans offer authentic Tibetan cuisine in a warm, sincere ambiance. What once started as an innovative street food offering around Switzerland has grown into the successful Tenz restaurant. TEXT: NANE STEINHOFF  I  PHOTOS: TENZ GMBH

“According to the motto ‘less is more’, we have specialised in ‘momos’ (Tibetan wheat dough dumplings that are traditionally filled with yak meat and served for celebratory meals). With the objective of getting the most out of this special product, we have created different shapes, colours and non-traditional fillings like spinach or shiitake mushroom to turn momos into a product for everybody,” smiles Lobsang Reichlin, one of the Tenz restaurant’s three dynamic founders. Today, Tenz’s delicious, steamed dumplings impress young and old alike with their soft shells and their juicy, perfectly seasoned fillings. The momos had their beginnings in the kitchen of Tenzin Tibatsang who fled from occupied Tibet to Nepal and India as a child. When he was a graphic designer for 40  |  Issue 62  |  May 2018

an advertising agency in Zurich, he designed a political campaign for Tibet which he wanted to finance with momos – a delicacy that he knew from his family. His agency colleagues were Tibatsang’s guinea pigs and they were astonished by the taste. Thus, soon after, he began offering the speciality to the public at Zurich’s Street Food Festival and the rest is history. To meet the momo demand, Lobsang Reichlin and Chimey Nelung, who both have Tibetan roots and know Tibatsang from the Tibetan Youth Association, joined the team. “Back then, we were politically active. Today, we build awareness for Tibet and try to bring Tibetan culture closer to the people with our momos,”explains Reichlin. What started off as street food, has now become a successful restaurant in Zu-

rich’s Lochergut district. Tenz impresses with a small menu that puts emphasis on different momos, served with a variety of salads. Signature dishes that should not be missed here are the Swiss beef momos (‘Tenz Classic Rind’) or the vegetarian momos (‘Tenz Classic Vegi’). Reichlin concludes: “As much as we love our little restaurant, Tibetans are nomads. Maybe that’s why we feel home on the road and have continued to steam our momos at small and large festivals all over Switzerland since 2015.” www.tenz.ch

Switzerland was one of the first countries that took in Tibetan refugees after China’s occupation of Tibet. Therefore, Europe’s largest Tibetan exile community can be found in Switzerland today. Tenz restaurant primarily employs young Tibetan students and refugees from Tibet. Additionally, Tenz supports different projects that deal with Tibet every year (for example, the Tibet Film Festival).