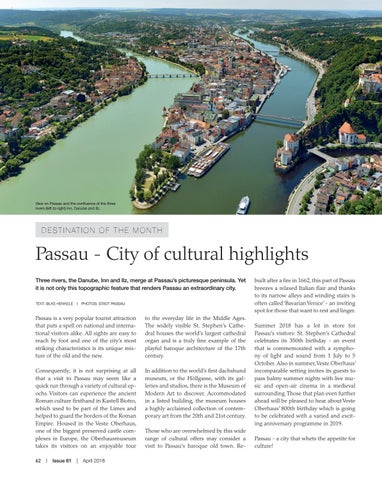 View on Passau and the confluence of the three rivers (left to right) Inn, Danube and Ilz.

Passau - City of cultural highlights Three rivers, the Danube, Inn and Ilz, merge at Passau’s picturesque peninsula. Yet it is not only this topographic feature that renders Passau an extraordinary city. TEXT: SILKE HENKELE  I  PHOTOS: STADT PASSAU

Passau is a very popular tourist attraction that puts a spell on national and international visitors alike. All sights are easy to reach by foot and one of the city’s most striking characteristics is its unique mixture of the old and the new.

to the everyday life in the Middle Ages. The widely visible St. Stephen’s Cathedral houses the world’s largest cathedral organ and is a truly fine example of the playful baroque architecture of the 17th century.

Consequently, it is not surprising at all that a visit to Passau may seem like a quick run through a variety of cultural epochs. Visitors can experience the ancient Roman culture firsthand in Kastell Biotro, which used to be part of the Limes and helped to guard the borders of the Roman Empire. Housed in the Veste Oberhaus, one of the biggest preserved castle complexes in Europe, the Oberhausmuseum takes its visitors on an enjoyable tour

In addition to the world’s first dachshund museum, or the Höllgasse, with its galleries and studios, there is the Museum of Modern Art to discover. Accommodated in a listed building, the museum houses a highly acclaimed collection of contemporary art from the 20th and 21st century.

Those who are overwhelmed by this wide range of cultural offers may consider a visit to Passau’s baroque old town. Re-

built after a fire in 1662, this part of Passau breezes a relaxed Italian flair and thanks to its narrow alleys and winding stairs is often called ‘Bavarian Venice’ - an inviting spot for those that want to rest and linger. Summer 2018 has a lot in store for Passau’s visitors: St. Stephen’s Cathedral celebrates its 350th birthday - an event that is commemorated with a symphony of light and sound from 1 July to 5 October. Also in summer, Veste Oberhaus’ incomparable setting invites its guests to pass balmy summer nights with live music and open-air cinema in a medieval surrounding. Those that plan even further ahead will be pleased to hear about Veste Oberhaus’ 800th birthday which is going to be celebrated with a varied and exciting anniversary programme in 2019. Passau - a city that whets the appetite for culture!