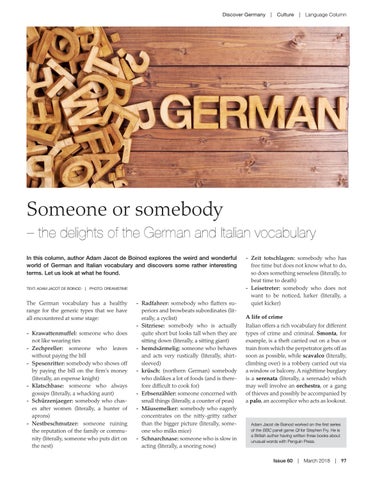 - Zeit totschlagen: somebody who has free time but does not know what to do, so does something senseless (literally, to beat time to death) - Leisetreter: somebody who does not want to be noticed, lurker (literally, a quiet kicker) A life of crime Italian offers a rich vocabulary for different types of crime and criminal. Smonta, for example, is a theft carried out on a bus or train from which the perpetrator gets off as soon as possible, while scavalco (literally, climbing over) is a robbery carried out via a window or balcony. A nighttime burglary is a serenata (literally, a serenade) which may well involve an orchestra, or a gang of thieves and possibly be accompanied by a palo, an accomplice who acts as lookout.