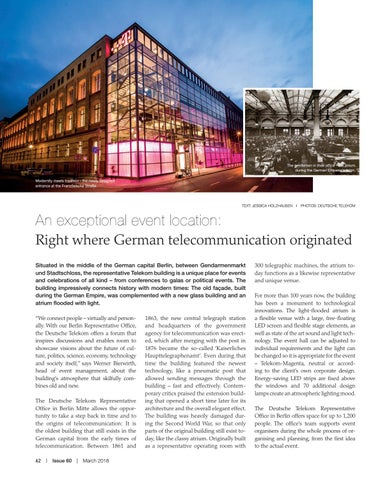 The gentlemen in their office - the atrium during the German Emperor’s reign. Modernity meets tradition - the newly designed entrance at the Französische Straße.

An exceptional event location: Right where German telecommunication originated Situated in the middle of the German capital Berlin, between Gendarmenmarkt und Stadtschloss, the representative Telekom building is a unique place for events and celebrations of all kind – from conferences to galas or political events. The building impressively connects history with modern times: The old façade, built during the German Empire, was complemented with a new glass building and an atrium flooded with light. “We connect people – virtually and personally. With our Berlin Representative Office, the Deutsche Telekom offers a forum that inspires discussions and enables room to showcase visions about the future of culture, politics, science, economy, technology and society itself,” says Werner Bierwirth, head of event management, about the building’s atmosphere that skilfully combines old and new. The Deutsche Telekom Representative Office in Berlin Mitte allows the opportunity to take a step back in time and to the origins of telecommunication: It is the oldest building that still exists in the German capital from the early times of telecommunication. Between 1861 and 62  |  Issue 60  |  March 2018

1863, the new central telegraph station and headquarters of the government agency for telecommunication was erected, which after merging with the post in 1876 became the so-called ‘Kaiserliches Haupttelegraphenamt’. Even during that time the building featured the newest technology, like a pneumatic post that allowed sending messages through the building – fast and effectively. Contemporary critics praised the extension building that opened a short time later for its architecture and the overall elegant effect. The building was heavily damaged during the Second World War, so that only parts of the original building still exist today, like the classy atrium. Originally built as a representative operating room with

300 telegraphic machines, the atrium today functions as a likewise representative and unique venue. For more than 100 years now, the building has been a monument to technological innovations. The light-flooded atrium is a flexible venue with a large, free-floating LED screen and flexible stage elements, as well as state of the art sound and light technology. The event hall can be adjusted to individual requirements and the light can be changed so it is appropriate for the event – Telekom-Magenta, neutral or according to the client’s own corporate design. Energy-saving LED strips are fixed above the windows and 70 additional design lamps create an atmospheric lighting mood. The Deutsche Telekom Representative Office in Berlin offers space for up to 1,200 people. The office’s team supports event organisers during the whole process of organising and planning, from the first idea to the actual event.