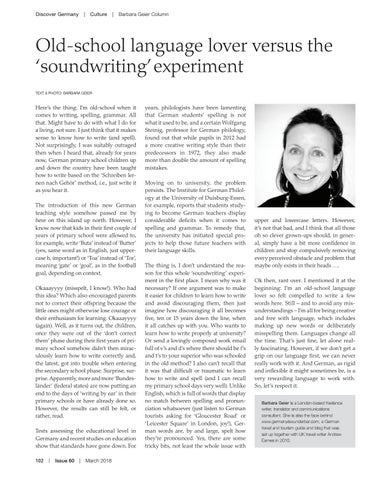 Here’s the thing: I’m old-school when it comes to writing, spelling, grammar. All that. Might have to do with what I do for a living, not sure. I just think that it makes sense to know how to write (and spell). Not surprisingly, I was suitably outraged then when I heard that, already for years now, German primary school children up and down the country have been taught how to write based on the ‘Schreiben lernen nach Gehör’ method, i.e., just write it as you hear it. The introduction of this new German teaching style somehow passed me by here on this island up north. However, I know now that kids in their first couple of years of primary school were allowed to, for example, write ‘Buta’ instead of ‘Butter’ (yes, same word as in English, just uppercase b, important!) or ‘Toa’ instead of ‘Tor’, meaning ‘gate’ or ‘goal’, as in the football goal, depending on context. Okaaayyyy (misspelt, I know!). Who had this idea? Which also encouraged parents not to correct their offspring because the little ones might otherwise lose courage or their enthusiasm for learning. Okaaayyyy (again). Well, as it turns out, the children, once they were out of the ‘don’t correct them’ phase during their first years of primary school somehow didn’t then miraculously learn how to write correctly and, the latest, got into trouble when entering the secondary school phase. Surprise, surprise. Apparently, more and more ‘Bundesländer’ (federal states) are now putting an end to the days of ‘writing by ear’ in their primary schools or have already done so. However, the results can still be felt, or rather, read. Tests assessing the educational level in Germany and recent studies on education show that standards have gone down. For 102  |  Issue 60  |  March 2018

years, philologists have been lamenting that German students’ spelling is not what it used to be, and a certain Wolfgang Steinig, professor for German philology, found out that while pupils in 2012 had a more creative writing style than their predecessors in 1972, they also made more than double the amount of spelling mistakes. Moving on to university, the problem persists. The Institute for German Philology at the University of Duisburg-Essen, for example, reports that students studying to become German teachers display considerable deficits when it comes to spelling and grammar. To remedy that, the university has initiated special projects to help those future teachers with their language skills. The thing is, I don’t understand the reason for this whole ‘soundwriting’ experiment in the first place. I mean why was it necessary? If one argument was to make it easier for children to learn how to write and avoid discouraging them, then just imagine how discouraging it all becomes five, ten or 15 years down the line, when it all catches up with you. Who wants to learn how to write properly at university? Or send a lovingly composed work email full of v’s and d’s where there should be f’s and t’s to your superior who was schooled in the old method? I also can’t recall that it was that difficult or traumatic to learn how to write and spell (and I can recall my primary school days very well). Unlike English, which is full of words that display no match between spelling and pronunciation whatsoever (just listen to German tourists asking for ‘Gloucester Road’ or ‘Leicester Square’ in London, joy!), German words are, by and large, spelt how they’re pronounced. Yes, there are some tricky bits, not least the whole issue with

upper and lowercase letters. However, it’s not that bad, and I think that all those oh so clever grown-ups should, in general, simply have a bit more confidence in children and stop compulsively removing every perceived obstacle and problem that maybe only exists in their heads …. Ok then, rant over. I mentioned it at the beginning: I’m an old-school language lover so felt compelled to write a few words here. Still – and to avoid any misunderstandings – I’m all for being creative and free with language, which includes making up new words or deliberately misspelling them. Languages change all the time. That’s just fine, let alone really fascinating. However, if we don’t get a grip on our language first, we can never really work with it. And German, as rigid and inflexible it might sometimes be, is a very rewarding language to work with. So, let’s respect it. Barbara Geier is a London-based freelance writer, translator and communications consultant. She is also the face behind www.germanyiswunderbar.com, a German travel and tourism guide and blog that was set up together with UK travel writer Andrew Eames in 2010.