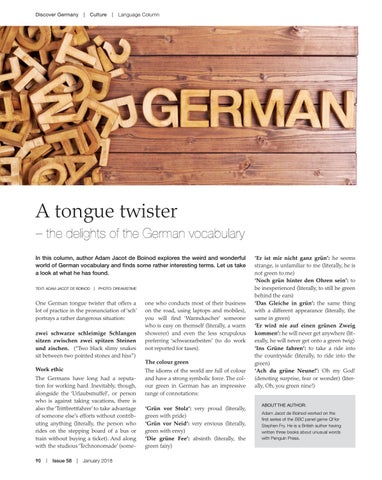 – the delights of the German vocabulary

In this column, author Adam Jacot de Boinod explores the weird and wonderful world of German vocabulary and finds some rather interesting terms. Let us take a look at what he has found. TEXT: ADAM JACOT DE BOINOD  |  PHOTO: DREAMSTIME

One German tongue twister that offers a lot of practice in the pronunciation of ‘sch’ portrays a rather dangerous situation: zwei schwarze schleimige Schlangen sitzen zwischen zwei spitzen Steinen und zischen. (“Two black slimy snakes sit between two pointed stones and hiss”) Work ethic The Germans have long had a reputation for working hard. Inevitably, though, alongside the ‘Urlaubsmuffel’, or person who is against taking vacations, there is also the ‘Trittbrettfahrer’ to take advantage of someone else’s efforts without contributing anything (literally, the person who rides on the stepping board of a bus or train without buying a ticket). And along with the studious ‘Technonomade’ (some90  |  Issue 58  |  January 2018

one who conducts most of their business on the road, using laptops and mobiles), you will find ‘Warmduscher’ someone who is easy on themself (literally, a warm showerer) and even the less scrupulous preferring ‘schwarzarbeiten’ (to do work not reported for taxes). The colour green The idioms of the world are full of colour and have a strong symbolic force. The colour green in German has an impressive range of connotations: ‘Grün vor Stolz’: very proud (literally, green with pride) ‘Grün vor Neid’: very envious (literally, green with envy) ‘Die grüne Fee’: absinth (literally, the green fairy)

‘Er ist mir nicht ganz grün’: he seems strange, is unfamiliar to me (literally, he is not green to me) ‘Noch grün hinter den Ohren sein’: to be inexperienced (literally, to still be green behind the ears) ‘Das Gleiche in grün’: the same thing with a different appearance (literally, the same in green) ‘Er wird nie auf einen grünen Zweig kommen’: he will never get anywhere (literally, he will never get onto a green twig) ‘Ins Grüne fahren’: to take a ride into the countryside (literally, to ride into the green) ‘Ach du grüne Neune!’: Oh my God! (denoting surprise, fear or wonder) (literally, Oh, you green nine!) ABOUT THE AUTHOR: Adam Jacot de Boinod worked on the first series of the BBC panel game QI for Stephen Fry. He is a British author having written three books about unusual words with Penguin Press.